An Armiger Warglaive is the lightest class of Imperial Knight combat walker usually piloted by Nobles who are of lesser lineage than other Knight pilots. Warglaives are long-legged combat walkers designed to strike hard and fast at critical targets. Nimbler than the primary Imperial Knight patterns, these engines of war carry heavy weaponry powerful enough to break a battle line.

The Armiger Warglaive in particular is known for the sheer punch it can bring to bear at close quarters. Sprinting into the fray at a shocking pace, it levels a lance-like beam of super-heated directed energy from its Thermal Spear that can reduce a rockcrete bunker wall to a pool of bubbling lava. Those met by the ensuring charge are struck with an expert sweep of the Armiger's Reaper Chain-cleaver, a saw-toothed weapon that mangles metal and gnaws flesh to ruin with each shuddering impact.

Though they are the lightest class of Imperial Knight regularly deployed on the battlefields of the 41st Millennium, each Knight Armiger is still an imposing war engine capable of butchering entire squads. They possess exceptional speed, able to outpace most battle tanks and transport vehicles when moving at a flat-out run, and react almost as quickly as a flesh-and-blood warrior. Moreover, to compensate for their comparatively smaller size, Armiger-class Knights typically hunt in packs of two or three. In the case of Warglaives, this involves rapidly outflanking and encircling their quarry like wolves on the prowl, before closing in on a rune-transmitted signal to trap and slaughter the enemy.

Unusually for Knights, Armigers are not fitted with a full Throne Mechanicum. Instead they are controlled using a more compact device known as a Helm Mechanicum. Placed upon the head and connected via pre-frontal sockets to the pilot's cerebrum, these machines do not require a full Becoming ritual in order for neural interfacing to be successful. For this reason, the prestige of piloting an Armiger is significantly less than that attached to sitting a fully-fledged Throne Mechanicum. This is compounded by the fact that, while Armigers can operate independently, it is traditional for their Helms Mechanicum to be neurally slaved to the command impulses of a larger Knight, rendering them subordinate. To accept such mental serfdom is to possess the rank of Bondsman, and while this is certainly no mark of dishonour, it is far from glorious among the Nobles of the Knight Worlds.

For many Armiger pilots, the mental imperatives transmitted through their neural bonds can feel unnatural and invasive. It is common for new pilots to feel a sense of resentment or upset at having their desires and opinions directed remotely, while those without the requisite mental fortitude may even lose their grip on their sense of self. More than one Freeblade has been born from such feelings, the Armiger pilot rebelling and fleeing rather than enduring the mental dominance of another.

It is for this reason that many Armiger pilots train at the side of a Knight Preceptor before assuming their duties alongside their bond-liege. The dutiful and heroic example set by the Knights Preceptor inspires Armiger pilots to accept their subservience to such obvious champions of the Imperium, and also plants within their minds a firm aspiration to do their duty and to live up to the example set for them.

Even as the Knights Preceptor are conditioning the Armiger pilots, they are also busy assessing their abilities. Most Bondsmen begin piloting from the helm of a Warglaive, for its weapons and role are both relatively straightforward. Those who demonstrate a cool nerve and a marksman's eye are soon recommended by the Knight Preceptor for promotion to an Armiger Helverin.

It is for these reasons that the piloting of Armigers falls to those from the lower social strata of the Noble houses. Some give this duty to distant relatives and minor offshoots of more established bloodlines, or the surviving Knights of a house that has fallen upon hard times. Others elevate the finest common-born warriors from amongst their household guard or planetary militia forces, raising their families' standing from mere peasantry to valued and respected meritocracy.

Still other Noble houses maintain specialist sub-orders of favoured retainers who are fated from birth to be Armiger pilots. Such is the case with House Griffith's Order of the Hound, who are inculcated with notions of faithful service and honourable submission to a Noble's will. These warriors are expert Armiger pilots who favour the close-quarters aggression of the Warglaive, and who stride into battle alongside their masters filled with dogged determination to do their betters proud.

Nimble and responsive, Armiger Warglaives lope towards the enemy with purposeful strides. On one arm they wield fearsome Reaper Chain-cleavers, their adamantium teeth whirring, their actuator motors roaring. On the other arm they bear menacing Thermal Spears, bulky Melta Weapons that are essentially stripped down equivalents of the Knight Errant's Thermal Cannon. A single shot from such a weapon can vaporise even the most heavily protected combatant, melt through the wall of a bunker or reduce a battle tank to a molten wreck. Atop their carapace, each Warglaive also carries a Heavy Stubber for reaping infantry, or else a Meltagun that augments their already fearsome anti-armour capabilities.

The technical specifications of the Armiger Warglaive have not yet been publicly released by the Adeptus Mechanicus. 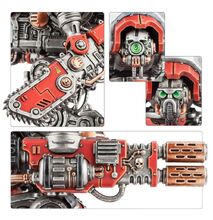 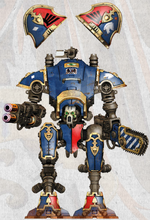 An unknown Armiger Warglaive of the Imperium-aligned House Terryn.

Armiger Warglaive Red Jackal of the Adeptus Mechanicus-aligned House Taranis. Note the top view of the Warglaive's chassis, depicting House heraldry on the shoulder armour and House crest on top of the main canopy. 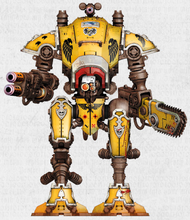 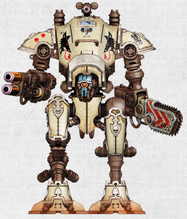 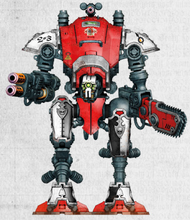 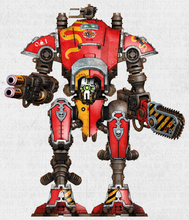 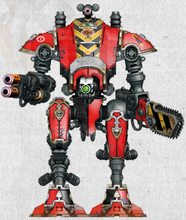 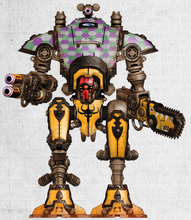 Armiger Warglaive Manifest Vengeance, a notable Freeblade of unknown origin.
Add a photo to this gallery
Retrieved from "https://warhammer40k.fandom.com/wiki/Armiger_Warglaive?oldid=354802"
Community content is available under CC-BY-SA unless otherwise noted.