The Armageddon Sector of the Milky Way Galaxy is a sector of the Imperium of Man that lies to the galactic northeast of Terra in the Segmentum Solar and was the site of several of the greatest conflicts ever fought by the Imperium of Man, including the Second and Third Wars for Armageddon against the massive Ork WAAAGH! of the Warlord Ghazghkull Thraka. The strategically vital Hive World of Armageddon is the fourth planet in its star system of ten planets and is the industrial hub of both the Armageddon Sub-sector and the greater region of the surrounding Armageddon Sector. Many worlds within a several light-year radius of Armageddon rely on it for its large industrial output.

The Armageddon Sector and in particular, the Hive World of Armageddon, have been torn apart by war. This important Imperial world is located 10,000 light years to the galactic northeast of Terra, at the centre of the Armageddon Sector. For millennia it has been one of the Imperium's industrial powerhouses, its vast weapon factories providing arms and materiel to the Imperial Guard for use in campaigns all over the galaxy. Its strategic importance and massive stockpiles of weapons have made it the target for several major invasions.

The latest Ork invasion of Armageddon is not the first time that the planet has been attacked. More than five hundred standard years before Ghazghkull was born, Armageddon faced no less deadly a threat from an enemy of a very different nature – the Forces of Chaos, during the First War for Armageddon. Following a rash of strange, inexplicable events, armed rebellion erupted in the huge hive cities that stud the surface of Armageddon. The revolts were quickly put down on the continent of Armageddon Secundus, but amongst the more scattered hives of the continent of Armageddon Prime they proved more difficult to eradicate. Busy containing the rebellion, the Planetary Defence Force was caught by surprise when the Space Hulk Devourer of Souls appeared in the Armageddon System. On board was an enormous Chaos army, led by the Daemon Primarch Angron. Chaos Space Marines from Angron's World Eaters Traitor Legion swept across the land, while at the same time Warp rifts flickered into existence and unleashed hordes of daemons upon the beleaguered Imperial defenders.

Armageddon Prime fell swiftly to the Chaotic army, and the survivors fell back and prepared to make a last ditch stand along the Rivers Styx and Chaeron. Unknown to Angron, several Great Companies of Space Wolves Space Marines led by the Great Wolf Logan Grimnar himself had arrived to bolster the Imperial defence. Titanic battles erupted all along the front as the Forces of Chaos crashed into the Imperial line. It was at this moment that Logan played his trump card in the form of a full company of Grey Knights. Only the Grey Knights could deal with an entity as powerful as Angron, and after a desperate battle they were able to hurl his spirit back into the Warp. Without their leader, the Forces of Chaos were routed and Armageddon saved.

The Second War for Armageddon

The Second War for Armageddon took place in 941.M41, when the Ork Warlord Ghazghkull Thraka invaded the planet at the head of a massive Ork WAAAGH! At the time Armageddon was ruled by Overlord Herman von Strab, memorably described as "the greatest waste of flesh and bone born in the last five hundred years." Von Strab's incompetence allowed Ghazghkull to conquer the continent of Armageddon Prime even more easily than Angron had been able to in the First Armageddon War. Even worse, he neglected to defend the river lines where Angron had been halted in sufficient strength, allowing Ghazghkull to smash through the Imperial lines and onto the ash waste plains of Armageddon Secundus which lay beyond.

Ork columns quickly overran Infernus Hive, and after bitter fighting Helsreach Hive fell to the Orks as well. The futile counterattacks ordered by Von Strab were smashed to pieces by the vastly superior Ork army. Only at Hades Hive were the Orks slowed down, as a desperate Imperial defence led by Commissar Yarrick did everything possible to stop the Orks from capturing the city. But even the legendary Commissar Sebastian Yarrick could not undo the harm inflicted by Von Strab, and as Ork forces advanced on Acheron and Tartarus hives it looked as if all of Armageddon must fall.

It was at this darkest moment that salvation arrived in the form of the Ultramarines, Salamanders and Blood Angels Space Marine Chapters. The Space Marines crashed into the Orks, stemming the Greenskin tide and giving the Imperial defenders the time they needed to organise their forces. With von Strab replaced as overall commander by the incomparably more capable Commander Dante of the Blood Angels, the forces of the Imperium started to turn the table, and finally a massive orbital assault made by the entire Blood Angels Chapter broke the back of the Ork army and sent the survivors fleeing back into the thick Equatorial Jungles that separate the continents of Armageddon Prime and Secundus.

The Third War for Armageddon

If the Imperium made one mistake in the aftermath of the Second Armageddon War, it was in assuming that Ghazghkull had been defeated. This was far from the truth. On the day of the Feast of the Emperor's Ascension, 998.M41, fifty-seven standard years to the day after the first Ork invasion, Ghazghkull's Greenskin hordes descended on the world of Armageddon once more. The Third War for Armageddon, the greatest of the Armageddon Wars, had begun. This time the defenders of Armageddon were better prepared than they had been prior to the earlier invasions. Unfortunately for them, so was Ghazghkull. At the head of an Ork WAAAGH! many times larger than any the galaxy had ever seen before, Ghazghkull was able to smash aside the defending Imperial fleet and land his forces all across the surface of Armageddon. A battle of unprecedented ferocity erupted -- entire hive cities were destroyed by asteroids hurled at the surface from orbiting Space Hulks, the sulphur-yellow skies of Armageddon became interwoven with the twisting con-trails of thousands of aircraft battling for aerial supremacy, while on the ground, invading Ork hordes clashed with Imperial Guard armies.

Such is the size and enormity of this latest war that neither side had been able to gain the upper hand. Hive cities had fallen and been recaptured, and millions of Ork and Imperial warriors had died, but still the war continued with no end in sight. Armageddon was consumed by the greatest single planetary battle the galaxy had ever known. The end of the Third War for Armageddon is clouded in mystery. Ultimately the campaign was considered a narrow Imperial victory as the world remained largely under the control of the Imperium. Word later reached Yarrick from the Black Templars Crusade fleet in orbit of Armageddon that Ghazghkull had fled the world once the planet's Season of Fire had begun and bogged down the Orks' offensives, possibly in his command Space Hulk, The Perversion of Pain. With this news, Yarrick gathered together his own forces and gave chase alongside the Black Templars Crusader Fleet, as the Black Templars' High Marshal Helbrecht began a new Crusade to seek out and finally destroy Ghazghkull.

In a daring covert operation by the 13th Penal Legion under the command of Colonel Schaeffer, the traitorous former Imperial Governor Herman von Strab was killed in the occupied Hive Acheron when he was tackled over the edge of a balcony by one Lieutenant Kage, both men falling to their deaths. Though the war is now considered officially over by the Adeptus Administratum, fighting still continues on the planet at present. Though Ghazghkull has left the world, pursued by Commissar Yarrick with a full Black Templars Crusade at his back, the remaining Orks have come to regard Armageddon as a kind of Greenskin Valhalla where they can always come to find a good fight, and the Imperium must still send more troops into the stalemated battle to keep the planet in Imperial hands and prevent the seemingly permanent Greenskin infestation from becoming a major threat once more.

The state of Armageddon and its surrounding star systems in the Armageddon Sector is currently dire. Billions of Imperial soldiers and citizens died in the war, and many of the hive cities of Armageddon lie in ruins. The damage done to the world by the Third War for Armageddon is some of the most devastating ever suffered by any people of the Imperium. Dozens of Imperial armies were decimated or destroyed altogether by the ferocious combat, and the damage done to the planet itself may take centuries to repair. Most of the settled planets in the Armageddon System have been ravaged by Ork forces, and with Ghazghkull having fled into deep space, it is likely he will quickly rebuild his forces and carve out a new Ork empire for himself, unless the Black Templars and Yarrick prove able to stop him.

While the vast bulk of the fighting in the Third War for Armageddon inevitably took place within the Armageddon System, and more acutely around the planet of Armageddon itself, the outlying systems and even the more distant neighbouring Sub-sectors played their own part in the conflict. The direct attack on Armageddon, for instance, had been preceded by decades of Ork pirate activity.

Desedna and Paleoth are actally two separate, but very closely linked, Sub-sectors. Both are small, with few populated worlds, with their importance instead stemming from the Desedna Cloud which engulfs them both. The cloud, a complex and hazardous accumulation of asteroids and debris strung out by the gravity of competing nearby stars, is a constant source of concern for the Imperium, who have long feared it could provide an all-too-convenient base of operations for pirates in the sector.

The Golgotha Sub-sector lies directly to the galactic east of Armageddon, having served as the source of both of Ghazghkull's invasions of that world. Orks have ruled over many of the star systems in this Sub-sector for centuries, but the disparate hordes were only united sector-wide by Ghazghkull in more recent times. Since then, his grip on the system has proven a constant thorn in the Imperium's side, isolating the few remaining human held worlds from one another to such a degree that most are essentially lost to the Imperium. Ghazghkull's power base covers what were once some of the most important systems in the sector, though his territory is also thought to include several star systems unknown to the Imperium which may have been Ork infested for millennia, making the true size of his empire ultimately inestimable.

The Justicar Sub-sector is widely believed to be one of the wealthiest regions in the entire Imperium, though the inevitable corruption attendant to this wealth makes this hard to gauge accurately. Even so, its high number of populated worlds, many of them home to ancient and powerful Imperial noble families, is one of the main reasons that the nearby Armageddon Sub-sector remains such a crucial point of control for the Imperium.

The Voss Sub-sector has for many centuries been one of the key centres of production for the Imperial Guard and Imperial Navy in the sector. At one time, it housed the sector naval command, although this was later moved to the Armageddon System's St. Jowen's Dock void station following the Second Armageddon War. 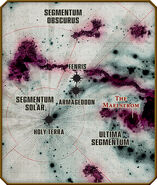 The location of War Zone Armageddon in the Segmentum Solar after 999.M41
Add a photo to this gallery
Retrieved from "https://warhammer40k.fandom.com/wiki/Armageddon_Sector?oldid=357542"
Community content is available under CC-BY-SA unless otherwise noted.