"I am all your nightmares. I am the legends your forebears whispered of in fearful tones. Every terror you have never imagined comes from me. Look upon my majesty and weep at the terror I have wrought upon you and your kin. I am an artist, and dread is the colour I splash across the canvas of your mind."

— Archon Anas Vaenix of the Kabal of the Sundered Eye

An Archon is the leader of a Dark Eldar Kabal, the organisation that serves as the heart of the standard Drukhari raiding force as well as the primary political unit within the Dark City. The Archons of the Drukhari Kabals are the true lords of Commorragh. They sit at the apex of the Dark Eldar hierarchy that controls the Dark City and the Labyrinthine Realm of the Drukhari portion of the Webway. Each wields enough political influence to collapse portions of realspace into the Warp, stall the progress of an Imperial Crusade or take the population of entire worlds as slaves. The overlord of a Kabal is always a potent foe on the battlefield, but he has attained his position not merely through martial prowess in the arts of war and violence but through consistently emerging as the victor in the most difficult game of all -- the byzantine intrigues that govern all things in the heart of the Dark City, sometimes known as the thyllian ai-kelethril, or ‘path of shards’. Only the most ingenious survive long enough to kill their way to the top.

In both word and deed, each Archon is as poisonous as a serpent, their mind as labyrinthine as the darkest reaches of the Webway. Such traits are a necessity, for to sit at the very peak of power is to make oneself a prominent target indeed. Though every Archon is a conceited, solipsistic megalomaniac convinced of his mental and physical superiority over all other beings, he will retain his position as an overlord of Commorragh for only as long as he can stave off the endless coup and assassination attempts of his rivals, enemies and his own Dracon lieutenants. One false move in the upper echelons of the Dark City is almost inevitably fatal, and so all Archons have an uncanny ability to predict the motives and schemes of others and take great delight in turning their rivals' traps against them in bloody and often spectacular ways.

Despite the elaborate network of allegiances within the Dark City, the Overlords of the Kabals run rings around those who seek to beat them at their deadly game. The endless ambitions of their underlings keep an Archon's paranoia as sharp as their own blades, and so it is in the service of treachery that all Archons truly excel, with their strategies stretching across millennia as centuries-old plots come to fruition. It is said by some that the Archons of the Drukhari could teach even Tzeentch, the Lord of Change, a thing or two about plotting for the long term. Some of the Archons known as the Lords of Twilight, who govern from the highest spires of Commorragh, even claim to have seized their thrones in the times before the Fall of the Eldar. These eldest of the Archons view the rest of their species with contempt; as little better than squabbling children. The Lords of Twilight do not suffer fools willingly. A single misstep in protocol may rouse an Archon to murderous wrath. In matters of maintaining their Kabal's hierarchy, Archons have been known to even prefer solutions that leave everyone less well-off if only to spite them.

Yet revelling in the depths of suffering and madness for an eternity eventually extracts a price. Over the long Terran years that they have held the reigns of power or clawed their way up to hold their lofty positions, the Archons of the Dark Eldar have enjoyed the pain of others for so long that only a true atrocity invigorates them. Archons regularly lead full-scale planetary raids for their Kabals, as drinking in the agony of entire planets is the only way they can regenerate themselves. Thousands of slaves must be sacrificed for the eldest Archons every night and this still may not be enough to make the oldest and most corrupt look youthful once more. As a result, elder Archons usually cover their black-veined faces with masks. Some Archons' masks are stylised and beautiful; others are bloody, alien and terrible, fashioned from the flayed flesh of their rivals' faces.

When the time comes to offer battle, an Archon will first stop at his weapons museums, savouring the process of selecting which of the baleful technologies of the Dark City -- Soul-traps, Agonisers, and Shadow Fields -- he will use to visit terror and pain upon the unwitting. Some Archons choose a different array of armaments for each engagement, indulging in the variety at their disposal. Others have used the same tools of slaughter for years, decades or even centuries, and continually find new ways to induce suffering with their favoured implements. One such weapon – the huskblade – is a favourite of many Archons, for it evaporates the internal fluids of those it slices, causing their flesh to shrivel and crumble to dust in a most spectacular fashion. Thus accoutred, the Archon strides haughtily onto the battlefield, eyeing their enemies with utter disdain. The Archon's most favoured retainers and pets, each of whom specialises in its own preferred form of visiting death and pain upon others, accompany him into combat. Even the least of a Kabal’s Archons can move like the wind, seeming almost to vanish from sight and reappear again when their blade has done its bloody work. Few mortals have ever seen a Dark Eldar Archon in combat -- and kept the tongue in their mouths to tell the tale.

Court of the Archon

Kabalite lords surround themselves with coteries of favoured retainers, pets and bodyguards. From the looming, serpentine mercenaries known as Sslyth to packs of drooling, fang-mawed Ur-Ghuls from the haunted pyramids of Shaa-dom, such a retinue can be as varied as the tools in an overlord's torture chamber. Lhamaeans lurk in their master’s shadow, unobtrusive until the moment they strike, their poisoned blades slicing armour, flesh and bone. Medusae shuffle forth at their master's behest, foul parasitic fleshsacs bobbing in their wake as their visors spew nauseous anti-light that hurls foes into contraempathic comas. Though each member of an Archon's Court is deadly in its own right, it is when these fiends are combined that they become a truly deadly instrument of their master's will. Depending on an Archon's personality, this court can be comprised of a highly eclectic group, but is usually drawn from among the following types of beings: 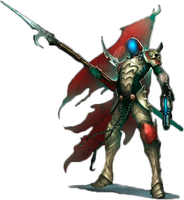 Vraesque Malidrach, Archon of the Kabal of the Flayed Skull 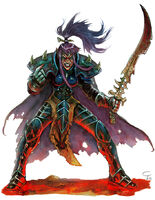 Salaine Morn, Archon of the Kabal of the Shadowed Thorns

Mother of Shadows, Archon of the Children of Thorns

Zaergarn Kul, Archon of the Kabal of the Splintered Talon 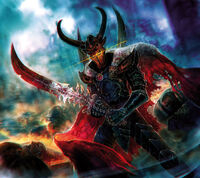 A Dark Eldar Archon thrills in the slaughter of Space Marines

Archon Archara Witherchill leads her Court of the Archon in battle

Archon Khadys Abrahak, undisputed ruler of the Lords of the Iron Thorn and his Court of the Archon

Archon Vraesque Malidrach, ruler of the Kabal of the Flayed Skull, attended by his Court of the Archon
Add a photo to this gallery
Retrieved from "https://warhammer40k.fandom.com/wiki/Archon?oldid=326003"
Community content is available under CC-BY-SA unless otherwise noted.