Warhammer 40k Wiki
Register
Don't have an account?
Sign In
Advertisement
in: A, Adeptus Mechanicus, Imperial Technology,
and 4 more
English

Arc Weapons are a type of weapon utilised by the armed forces of the Adeptus Mechanicus. They are powered by bulky perma-capacitors shipped from Mars' great repositorum; some of these zinc-plated blocks store energy from days when the Imperium was young. Arc Weapons discharge directed energy blasts with a loud crack, firing blots of blue-white electricity that can fry a man's brain or overload a war machine's data-cortex in a solar second.

Arc Claws are part of the standard armament of the Cult Mechanicus' Kataphron Breachers. During the Cyberghoul Wars, the burrowing Daemon Engines of Warpsmith Votogr Bolga were met talon to talon by Forge World Metalica's Servitor defenders. It was the invention of the Arc Claw that turned the tide -- a potent delivery system for the most sophisticated scrambler technology that the Adeptus Mechanicus could devise.

An Arc Lance is a powerful spear-like weapon akin both to the Arc Maul of the Skitarii Clade officers and the far heavier Cerastus Shock Lance wielded by the powerful Cerastus Knight-Lancer. The Arc Lance inflicts damage by short-range blasts of corscating energy that can also be used as a short-range shooting weapon which are both qualities valued by the Secutarii Hoplite Phalanxes. In their hands, the Arc Lance's power supply can further be augmented through the recuperated energy from the inversion generatoria mounted in their Mag-inverter Shields.

An Arc Maul is, at first glance, a bludgeoning weapon designed to crush and pulp its targets. However, when activated, it becomes a rod of lightning like unto those wielded by the gods of old Earth. Those struck by an Arc Maul often convulse themselves to death as the riotous energies playing across them take their toll. Only Skitarii Vanguard and Ranger Alphas bear the right to wield Arc Mauls in battle.

A small pistol based on Arc Weapon technology and most commonly used by Skitarii Vanguard / Ranger Alphas.

A rapid firing Arc Weapon used as a special weapon in Skitarii Vanguard and Ranger squads.

A heavy Arc Weapon designed to slay the Daemon machines of the Dark Mechanicus, Heavy Arc Rifles send out shallow parabolas of crackling energy that revolve around each other, forming triple helixes as they blast forth. Should these ground upon a metallic target, they will swiftly overload its circuits and banish its animating spirit to the ether. Heavy Arc Rifles are part of the standard armament of Cult Mechanicus' Kataphron Breachers. 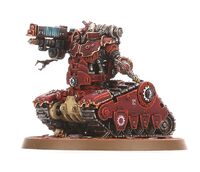 A Kataphron Breacher armed with a Heavy Arc Rifle and Arc Claw.
Español
Community content is available under CC-BY-SA unless otherwise noted.
Advertisement