"Blood Ravens, hear me! I am Araghast The Pillager! Master of Hounds, the Lash of the Black Legion! You, and ALL your kind are cowards! Lowly lickspittles! You must be emulating that pile of bones you call an Emperor! You are as dead and as useless as him! I am destroying your worlds, Blood Ravens, yet you do nothing! I see your precious craft, hanging in orbit above Aurelia! I am here! FACE ME, IF YOU DARE!"

Araghast the Pillager was a powerful Chaos Lord who commanded the Chaos Space Marine warband of the Black Legion that assaulted the Sub-sector Aurelia during the Second Aurelian Crusade. Araghast was betrayed by his second-in-command, the former Dark Apostle Eliphas the Inheritor, and subsequently killed by a Blood Ravens Chapter strike force led by Force Commander Aramus.

Araghast was a bloodthirsty, brutal warrior, who possessed formidable strength and tremendous fighting skill even for an Astartes, and was feared throughout the galaxy for pillaging hundreds of worlds. He possessed a terrible savagery rarely seen amongst the greatest warriors of the Black Legion. Though he served as a Champion of Chaos for the Blood God Khorne it is noteworthy that he was not exclusively devoted to his patron Chaos God, as he made extensive use of Chaos Sorcerers within his warband, and the Blood God detested such practices.

He also possessed psychic powers of his own that he used to provide a ranged attack when wielding his favoured Lightning Claws. His Black Legion warband assailed the Aurelian sub-sector alongside his second-in-command, the resurrected Word Bearers Dark Apostle Eliphas the Inheritor, who attacked and raided several planets of the sub-sector while battling the Astartes of the Blood Ravens Chapter. In battle, Araghast was known to challenge his opponents and ridicule them into submission to accept his challenge.

Araghast was also incredibly arrogant and boasted regularly about how he would force the Blood Ravens to retreat from the sub-sector; however, he still showed some tactical acumen and ability. But in the end, he was unable to stop Eliphas from betraying him and the Blood Ravens from slaying him so that Eliphas could become the new leader of his Black Legion warband.

Araghast's psychic powers included the ability to project balls of dreadful fire from the Warp. He could also create a defensive barrier of razor-sharp rocks that would sprout from the ground in front of him with violent speed, crushing and cutting flesh and Ceramite armour with ease. His most powerful psychic power was reserved for fighting more powerful foes. This power allowed Araghast to drain the life force of a Chaos Cultist to heal his own wounds with the stolen life force. It is unknown why Khorne did not reject or punish his champion for this display of psychic power so antithetical to his own doctrines.

Araghast wore a Chaos-tainted suit of Terminator Armour decorated with trophy racks, a terrifying banner made from the face of a human commander and a cape made from the flayed skin of humanoid faces. When he first entered the Aurelian Sub-sector he was armed with a Power Sword and a Combi-Flamer. But when the Blood Ravens defence of Aurelia proved stronger than he originally thought, he replaced the Power Sword and Combi-Flamer with a pair of lethal Lightning Claws and relied on his psychic abilities to provide ranged attack power. His wargear included: 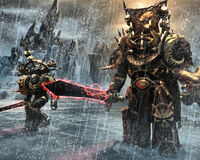 Araghast the Pillager in his Terminator Armour

Araghast and his successor, Eliphas the Inheritor

The Chaos Lord Araghast leads his forces into combat
Add a photo to this gallery
Retrieved from "https://warhammer40k.fandom.com/wiki/Araghast_the_Pillager?oldid=348717"
Community content is available under CC-BY-SA unless otherwise noted.