Aquilon Terminator Squads were a specialist formation of veteran Custodians that served in the ancient Legio Custodes, the elite bodyguard of the Emperor of Mankind, during the Great Crusade and Horus Heresy eras during the 30th and early 31st Millennia. This elite formation was arrayed in formidable Aquilon Pattern Terminator Armour, a more complex form of standard Cataphractii Pattern Terminator Armour that possessed additional integrated power systems and capacitors. To augment their formidable armour they had access to a deadly array of weaponry including - Solerite Power Gauntlets, Adrathic Destructor, Lastrum Storm Bolter or Infernus Firepikes. It is unknown if these elite squadrons are still deployed by the modern era Adeptus Custodes of the 41st Millennium. 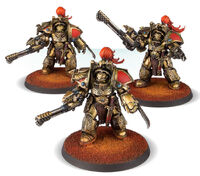 An Aquilan Terminator Squad armed with Solerite Power Talons and Infernus Firepikes.
Add a photo to this gallery
Retrieved from "https://warhammer40k.fandom.com/wiki/Aquilon_Terminator_Squad?oldid=319809"
Community content is available under CC-BY-SA unless otherwise noted.