The Aquila Lander is a small transport shuttle used by the Imperial Navy to transport important personnel to and from Imperial starships in orbit and to the surface of planets. The Aquila Lander can be seen on almost every single Imperial Navy starship alongside its complement of fighters and bombers in the launch bays. The Aquila Lander is not a combat craft and it is only armed with a single nose-mounted Heavy Bolter for defensive purposes. However, it possesses excellent armour and can withstand enough punishment to ensure its passengers reach their destination safely.

The Aquila Lander is used as a transport shuttle for important Imperial personnel including dignitaries, officials, Inquisitors, military commanders, and Planetary Governors. The Aquila has one crewman, a pilot, in an armoured cockpit at the front of the spacecraft. Twin, independently maneuverable jet engines are set beside the cockpit and built within the fuselage, which allows the vehicle to also hover over its landing point. The shuttle has a command throne for the official to sit in, possesses advanced communications equipment including a hololithic transceiver, and also an observation dome in the dorsal section just above and behind the cockpit. Sometimes Aquila Landers are decorated with Purity Seals. The shuttle is fully capable of both atmospheric flight and travel through the void of space. The craft is used mostly to take Imperial VIPs and their retinues to other Imperial starships or to and from a planet's surface. The Aquila Lander does not possess Warp capability and thus is not suited for interstellar travel. The Aquila Lander is highly maneuverable in both space and in atmosphere, and this is its best defence against any attackers. In case of assault by an enemy, the shuttle is heavily armoured and can withstand several direct hits from the weapons of most strike aircraft. During landing the entire crew compartment lowers to the ground for easier access.

The Aquila Lander is named after the iconic crest of the Imperium of Man, the Aquila, due to the unique shape of its wings. The multiple independent engine vents that run up along the wings come together to form a distinctive "feathered" appearance, which is similar to the wings of the Imperial Aquila symbol. The shuttle is capable of carrying up to seven passengers, usually a high-ranking Imperial commander or noble and his or her aides and elite guards.

Known Users of The Aquila Lander

The Aquila Lander is armed with a single, nose-mounted Heavy Bolter, but this weapon can be switched with either a Multi-Laser or an Autocannon. The ship can also be outfitted with an ejector seat, extra cockpit armour plating, and illumination flares.

An Aquila Lander just after touch-down on a planetary surface, its engines still cooling down

An Aquila Lander in the void of space

An Imperial Navy Aquila Lander; the wings have been shaped to bear a resemblance to the Imperial Aquila icon 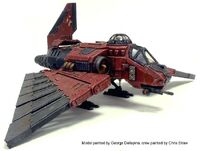 An Aquila Lander of the Inquisition deployed for landing
Add a photo to this gallery
Retrieved from "https://warhammer40k.fandom.com/wiki/Aquila_Lander?oldid=95190"
Community content is available under CC-BY-SA unless otherwise noted.