The Imperial Aquila, known in ancient times as the Palatine Aquila, is a two-headed eagle sigil which represents the entirety of the Imperium of Man.

This symbol is often prominently displayed on the chest guard of the transhuman warriors of the Adeptus Astartes as well as commonly stenciled upon almost everything that belongs to the Imperium, including vehicles, equipment and edifices. This emblem identifies the allegiance and proprietary rights of these items as belonging to the Imperium.

The Aquila is also considered a sacred symbol by the Adeptus Ministorum, the Imperium's state church, and is used in countless rituals of worship and homage to the divine Emperor of Mankind.

The Aquila is held in such high regard that all Astra Militarum troops are required by regulation to salute it. Failure to do so results in the offending Imperial Guardsman having his left cheek branded and a subsequent court-martial.

The Aquila is the ancient symbol of the Imperium of Man, chosen by the Emperor of Mankind Himself at the start of the Great Crusade in circa 798.M30. The Aquila replaced the earlier symbol of a lightning bolt that had been used to represent the Imperial forces during the Unification Wars on Terra in the late 30th Millennium.

The Emperor intended the Aquila to serve as the banner under which His newly-created Legiones Astartes would forge a new galaxy-spanning interstellar government for humanity.

The ancient variant of the Aquila used during the Great Crusade era was known as the Palatine Aquila. It was after the Proximan Betrayal that the then-loyal Emperor's Children Legion was granted the exclusive right to bear the Palatine Aquila, the Emperor's personal standard, in its own heraldry.

This honour was bought in blood when the III Legion's XVI Cohort, assigned to the Proxima Compliance ceremonies and Honour Guard for the Emperor, fought and died to the last warrior alongside the Legio Custodes, never giving ground during the insurrectionist surprise attack on the ceremonial plaza.

By their sacrifice was the wounded Emperor, who had suffered injury by the use of a Vortex Weapon, bought time to recover and fight His way clear of the insurrectionist trap.

In recognition of this sacrifice, the standard of the Palatine Aquila so fiercely fought for that day was given to the Emperor's Children by the Emperor's own hand, to be their relic ever after, along with the right to end the Proxima revolt by Exterminatus and so repay the blood that was owed them.

From that moment on, the Emperor's Children were the only Space Marine Legion granted the right to bear this sacred emblem as the executors of the Imperial will.

During the time of the Great Crusade before the Horus Heresy, the two-headed eagle was blind-folded on the right side, while the left possessed eyes. The blind side of the symbol represented Mankind looking back into its past at the lessons of its history and traditions, while the sighted eagle looked into the future and the hope of the better life that the Emperor would create for humanity.

After the Heresy, as the Imperial Cult took hold of the minds of humanity, the Aquila's meaning changed to represent the political union of the Imperium of Man that had been formed between the forces of the Emperor on Terra and the Mechanicum of Mars following the signing of the Treaty of Mars.

Space Marines sometimes use a different version of the Aquila on their weapons, chestplates, banners and finials. Known as an Imperialis, this ancient symbol consists of a winged skull, and harkens back to the Horus Heresy when it was used by the Loyalist Space Marine Legions and the troops of the Imperial Army in recognition of bravery and loss.

Later, it became a badge of honour borne by Loyalist units during the Heresy. Now, in the late 41st Millennium, it is used more to symbolise the righteous victory of the Imperium of Man over its many enemies in general and is awarded to Space Marines as a badge of honour following a victorious battle.

The Imperialis is intended to represent the Space Marines' slightly different relationship with the Emperor than the rest of humanity. Traditionally, the Astartes do not believe that the Emperor is a deity but revere Him as humanity's greatest visionary and for the extraordinary sacrifice He made for the sake of Mankind when He defeated Horus and allowed Himself to be interred as a living corpse within the Golden Throne.

The Astartes are willing to defend the Emperor's original vision of the Imperium to their last breath despite His current existence trapped somewhere between life and death.

The Sign of the Aquila is a universal hand gesture used to show one's allegiance to the Imperium of Man, and is known to every citizen within its boundaries. It is used as a respectful neutral greeting or farewell gesture, mainly when one is unsure of the recipient's rank and/or the proper etiquette in the given situation.

There is some debate as to how the gesture is made: the Sign of the Aquila has its user place their hands flat on their chest with their thumbs interlocked. This forms the image of the Imperial Eagle on the chest with the thumbs forming the heads and the straight fingers symbolising its wings. The Aquila gesture is often accompanied by a nod or slight bow.

The Aquila is also displayed on Space Marine Power Armour since the end of the Horus Heresy when that honour was given to all Loyalist Space Marines by the Emperor rather than just the Traitor Marines of the Emperor's Children Legion.

The Aquila is also stamped on weapons produced for the Imperium at its Adeptus Mechanicus Forge Worlds. Bolters, Lasguns, tanks, and every other piece of Imperial military equipment often displays the Aquila painted or stamped on them.

The Aquila is also stamped on signet rings belonging to those serving in an Imperial public office, in the Imperial military or in another Adepta of the Adeptus Terra like the Administratum. 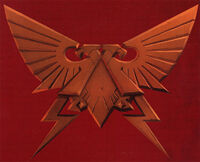 Ancient Aquila depicting the various Adepta that make up the Imperium of Man.

An alternative form of the Aquila representing the Imperium of Man.

Another variant of the Imperial Aquila.
Español
Community content is available under CC-BY-SA unless otherwise noted.
Advertisement