Brass covered in rust and decay

The Apostles of Contagion are a warband or vectorium of Chaos Space Marines drawn from the Death Guard Traitor Legion that dedicate themselves to the service of the Plague Lord Nurgle.

They are a vectorium of the 4th Plague Company, favouring viral bombardment and sorcerous saturation before the battle begins.

They march from amidst billowing clouds of corrosive spores and infectious vapours, their enemies screaming and putrefying even as they struggle to fight back.

As the Apostles chant the praise of Nurgle, packs of daemons rise from the organic slurry to join the fight, overrunning the enemy with a tide of bloated bodies.

The Apostles of Contagion are led by the vile and infamous Death Guard Lord Necrosius, the self-proclaimed "Hand of Nurgle."

The Apostles are thought to be responsible for Zombie Plague infestations that broke out across the Imperial Armoury World of Vraks during the Siege of Vraks in 813.M41.

The Apostles of Contagion can trace their origins back to the dark days of the Horus Heresy that occurred in the early 31st Millennium. They were once Space Marines of the resilient Death Guard Legion.

When their Legion fell to the vile temptations of Nurgle, Necrosius, a former Death Guard Apothecary, cast aside his former profession as a healer and gave himself over whole-heartedly to the predations of the Plague Lord. He soon discovered that he excelled at the daemonic arts.

As a zealous convert of Nurgle, Necrosius rapidly gathered a loyal following amongst his fellows who had followed their dark master into corruption.

Believing in the promise of eternal "life" brought to Mankind through the agency of Nurgle, these disciples would become the first Apostles of Contagion.

Bending his knee to no master save for Grandfather Nurgle, Necrosius' resentment of the Death Guard's First Captain Typhus, whose betrayal sent the Death Guard to its final damnation, festered into a bitter rivalry and open conflict down the years between Necrosius' Apostles and the Death Guard warband led by Typhus, now the Herald of Nurgle and the host of the Plague Lord's Destroyer Hive.

Parting company from their fellows in the Death Guard, the Apostles of Contagion chose to go their own way, spreading disease and Nurgle's greatest "gift," the Zombie Plague of walking death, wherever they went.

The Apostles were heedless to whom they brought this unholy blight, whether they were the loyal servants of the Corpse Emperor or even followers of the other Ruinous Powers. As a result of their actions, Necrosius and his Apostles have made many enemies and participated in a number of great atrocities over the millennia since the Heresy.

The Apostles of Contagion are a small but powerful vectorium, and number among their host not only the rotting and corpulent Plague Marines, but Nurgle-devoted heretics of uncertain origin and dark acolytes, apostate preachers and lesser Death Guard Sorcerers, each an apprentice to Necrosius' own mastery of the necromantic arts.

Like viral infections, the Apostles of Contagion embrace the ranks of Renegades and heretics to the Imperium like rotting spectres, preaching their poisoned words with their unholy dogma, converting the despairing masses to their dark cause.

Necrosius and his vile Plague Marine Sorcerers travel among the battlefields of the Imperium, conducting rites of the darkest sorcery over the killing grounds, mass graves and the unburied dead, preparing the way for the horror of undeath to come. The corpses of the fallen soon begin to stir in the blood-soaked earth, as Nurgle's dance of the dead awakens them once more, with Necrosius calling the tune.

The Apostles of Contagion wear brass-coloured Power Armour which appears rusty and is marred by decay and putrescence.

The Apostles of Contagion's badge is a crimson-coloured carrion fly, another of the nearly infinite variations on the Mark of Nurgle.

An Apostles of Contagion Plague Marine.

Necrosius, the Hand of Nurgle, Master of the Apostles of Contagion. 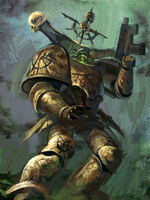 The Apostles of Contagion attack the foe following their toxic bombardment of the enemy's position.
Add a photo to this gallery
Retrieved from "https://warhammer40k.fandom.com/wiki/Apostles_of_Contagion?oldid=364519"
Community content is available under CC-BY-SA unless otherwise noted.