"The roar of engines, the recoil of cannons. That is where the true joy of battle lies."


— Brother-Sergeant Chronus, The Spear of Macragge

Sergeant Antaro Chronus is the most gifted tank commander of the Ultramarines Space Marine Chapter.

His tactical abilities extend to almost any tank or armoured vehicle in the Chapter's Armoury.

Few other armour commanders within the Adeptus Astartes can match his strategic genius and tactical acumen on the battlefield when it comes to armoured warfare.

In recognition of his superlative skills as the Chapter's preeminent tank commander, he was awarded the ancient title of "Spear of Macragge," the first since the time of the Great Crusade to bear that honour.

"Let them hide in their fortress. My crew can use the target practice."


— Brother-Sergeant Chronus, The Spear of Macragge

Antaro Chronus is the most gifted of all the Ultramarines tank commanders. While most such warriors dedicate themselves to the mastery of a particular type of armoured vehicle, Chronus' abilities extend to almost any tank in the Armoury of the Adeptus Astartes.

Few other commanders can match the precision of his bombardments when at the helm of a Whirlwind or a Vindicator. No living man can hope to be as coldly precise when unleashing the baleful weaponry of a mighty Predator.

For a Space Marine to be assigned to serve in the Armoury is an honour indeed, and to do so is to be entrusted with command of the Chapter's most valuable weapons of war. It is a transition that few Battle-Brothers are able to make, for the crew must suppress their physical self and adopt the adamantium behemoth's form as their own.

An armoured vehicle crewman must act as decisively and instinctively with the tank as he would with his own limbs. The tank's sensors and viewfinders become the commander's eyes and ears, its weapons his fists and rage, and its armour his skin.

Chronus takes such skill one step further. He knows the capabilities and limits of every weapon system in every tank, and is cognisant of which of those mechanisms can be bypassed or jury-rigged in the event of damage.

So it was that Chronus kept the Predator designated Rage of Antonius battleworthy during the closing actions of the Damnos Incident, despite suffering several broadside hits from Necron Gauss Cannons. That the Rage survived at all was the cause of much wonderment for the Techmarines who repaired the tank's extensive damage at the campaign's end.

That Chronus not only managed to complete his mission goal of destroying the Necron phase generator, but also forced the Necron war cell into full retreat before the Rage of Antonius ' systems went into shutdown, was seen as nothing short of miraculous. Such a feat has often been imitated by other Ultramarines tank crews, but never bettered.

For his actions on Damnos and a hundred other worlds, Sergeant Chronus was anointed as the "Spear of Macragge" -- an ancient, pre-Horus Heresy title awarded to the Ultramarines' preeminent tank commander.

As the Spear, it is Chronus' duty to lead the Chapter's armoured assaults, and his privilege to choose the chariot of war in which he rides to battle.

It is a unique position of authority within the Ultramarines, for it means that although Sergeant Chronus has command over some fifty Brother-Marines, he himself is not subject to the orders of a Captain and answers in all things only to his Primarch Roboute Guilliman and Marneus Calgar, the Lord Macragge and Chapter Master of the Ultramarines.

On the blazing fields of the world of Ironblood in 822.M41, the combined might of Chronus' Ultramarine armour and scores of Cadian Shock Troop tank regiments engaged the mech-horrors of Warpsmith Grathax and his Masters of Possession.

Across battlefronts hundreds of kilometres long, Chronus directed every feint and thrust, every assault and withdrawal, all while his personal Land Raider, Gladius II, claimed foe after foe.

It was the sergeant's peerless skill as a tank commander and armoured strategist that swiftly won the Cadian officers' absolute loyalty, cementing the Imperial forces into a coherent whole.

So many tanks and engines were destroyed that the wreckage-fields were visible from space, yet at last Sergeant Chronus' leadership saw the Chaos forces defeated.

In recognition of his Cadian allies' fortitude and skill, which had impressed him deeply, Chronus had the Ironblood campaign badge awarded to all who had fought there, cementing forever a bond of brotherhood and loyalty with the Cadians he had battled alongside.

During the Invasion of Ultramar led by the Daemon Prince M'kar and the Iron Warriors Warsmith Honsou in 854.999.M41, Chronus was deployed to the Agri-world of Quintarn, alongside the 5th and 6th Companies of the Ultramarines.

Faced with the apparently inexhaustible machine armies of the Dark Mechanicum warlord Votheer Tark, Chronus led his armoured division and the tanks of the Ultramar Auxilia in a vital delaying action. Together they delayed the Chaos war machines long enough for the city of Idrisia to be successfully fortified before their next offensive.

Under the leadership of Antaro Chronus, the vehicle formation known as the "Spear of Macragge" – bearing its commander's honorific -- took a great toll on the Necron forces during the Second Damnosian War.

Deployed via orbital lander in the first few solar minutes of the campaign, the tank squadron played a critical role in the fierce battles that followed.

Though Chronus found his initial assault stymied by powerful energy fields, and though his Land Raider Terminus Ultra Pride of Talassar was destroyed by the Necron Tesseract Vault, the Spear of Macragge crippled several Monoliths and destroyed dozens of lesser xenos war constructs before the war had run its course.

Sergeant Antaro Chronus in the cupola of an Ultramarines Land Raider Crusader. 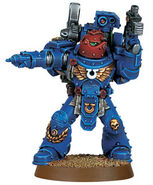 Antaro Chronus, the Spear of Macragge, armed with Bolt Pistol and Servo-Arm.
Add a photo to this gallery
Retrieved from "https://warhammer40k.fandom.com/wiki/Antaro_Chronus?oldid=353349"
Community content is available under CC-BY-SA unless otherwise noted.