Not so much a tank as a mobile weapons platform, a Necron Annihilation Barge is so-named for its extreme destructive potential. Whilst slow moving and ponderous, mobility is not its purpose. It excels instead in its aptly named role -- annihilation.

An Annihilation Barge is crescent shaped in appearance, with its main payload mounted atop its keel. Its open form is kept aloft by a sophisticated anti-gravitic engine, which allows the Barge to hover over any intervening terrain that might otherwise hamper its movement.

It is difficult to imagine a vehicle more unlike those manufactured by the Imperium of Man. In many ways, an Annihilation Barge bears even less resemblance to an Imperial tank than the similar anti-gravitic vehicles of the T'au Empire.

Like the Necrons themselves, the Annihilation Barge is merely a skeletal frame for supporting its weapons. While it may appear to lack armour, this is not quite true. The bulk of its protection takes the form of Quantum Shielding, which only exists at the moment of impact of enemy projectiles; thus leaving the vehicle light and manoeuvrable.

Annihilation Barges are the Necrons' favoured anti-infantry support platforms. Each is armed with a twin-linked pair of Tesla Destructors -- enormous energy cannons that  fire ferocious arcs of eldritch lightning.

In their usual configurations, Annihilation Barges are set in fixed positions in the lowest and deepest sanctums of a Necron tomb. Should an intruder manage to circumvent the existing layers of traps, service robots and prowling Necron Warriors, they will then have to pass beneath the concealed alcove emplacements above cyclopean doorways in which the Annihilation Barges lie.

An acrid discharge of emerald lightning later, and the interloper is naught but dust upon the tomb's stale breezes. Any collateral damage from the discharge of its weapons within the tomb structure can be repaired in short order by robotic Canoptek Spyders and Canoptek Wraiths, and is well worth the annihilation of any intruders.

When a Necron Overlord goes to war, the ancient repulsor sleds which keep Annihilation Barges aloft are coaxed back into life so that the vehicles' powerful firepower may be added to a Tomb World’s army.

In battle, Annihilation Barges lack the speed commonly associated with anti-gravitic vehicles and are seldom swift enough to keep pace with even the ponderous advance of a Necron army. Indeed, their movement is more akin to the slow progress of Imperial tanks.

As such, they will often be deployed as defences for strategic locations instead. From there, they can counter enemy scout elements without facing the risk of being swept aside by a concerted enemy attack.

Not only does this deployment render valuable sectors of the battlefield immune to all but the most determined of enemy assaults, it also ensures that the Annihilation Barges themselves are guaranteed to find bloody purpose. Additionally, most Necron Overlords will often task a squad of Immortals and Necron Warriors to act as guards, so as to better protect the valuable Annihilation Barges.

Such a partnership can prove advantageous for both parties -- the Annihilation Barge gains a screen of allies to drive back incoming assaults, whilst its bodyguards benefit from the vehicle’s immense firepower.

Nowhere are Annihilation Barges more commonly deployed than on the northern frontier planets of the Akannazad Dynasty. These Tomb Worlds are under perpetual assault from the Orks of Charadon, to whom the technology-rich and high ordered Necron planets present an irresistible lure -- both in terms of plunder and anarchic potential.

Without the support of Annihilation Barges, many of these worlds would have long ago been overrun. Few other weapons can wreak as efficient havoc amongst an oncoming Ork horde. Primary blasts can shred the the armour from Trukks and Looted Wagons, while the wildly arcing lightning that follows will incinerate any Ork Boyz unfortunate enough to be advancing alongside.

All Annihilation Barges are crewed by a pair of hard-wired Necron Immortals which are especially suited to their role. This is due to unique systems which allow for the direct interfacing between them and the vehicle.

This connection surpasses that of even the most advanced MIUs available to the Imperium, and in many ways there is no meaningful distinction between the craft and its crew.

Annihilation Barges used at the invasion of Amarah Prime during the Orphean War. 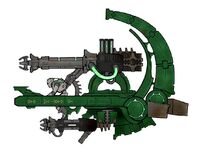 Side view of an Annihilation Barge. 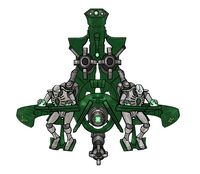