Warhammer 40k Wiki
Register
Don't have an account?
Sign In
Advertisement
in: A, Dark Angels, Imperium,
and 3 more
English

Black and White
The Angels of Vengeance is a Loyalist Chapter of Space Marines and a Second Founding Successor Chapter of the Dark Angels. It is thus counted amongst the ranks of the Unforgiven Chapters.

The deeds of the Angels of Vengeance are even less well-known than those of the other Unforgiven Chapters, for they shun fame and laurels, instead concentrating on their duties to the exclusion of all else. They are a grim and dour organisation, with all of their companies wearing power armour of jet black.

This is a tribute to the panoply worn by the original Dark Angels Legion, when they first set out from Terra on the Great Crusade in ca. 800.M30.

The Chapter is wont to become embroiled in battles that other forces would have little hope of winning, and emerging bloodied but victorious. The Angels of Vengeance have willingly suffered horrific casualties in the name of victory -- a result of their absolute refusal to retreat in the face of any foe.

The Chapter's very future has been put in jeopardy more than once, beginning with its appalling depletion during the Forgotten Wars. More recently, in the aftermath of the Siege of San Apolis, its losses were so extreme that the Chapter was forced to spend almost a century rebuilding before it could do battle once more.

Even for Adeptus Astartes, they are unrelenting in their persecution of the Emperor's foes, reserving a particular loathing for those who serve the Chaos Gods.

Though this Chapter's deeds are less well known across the Imperium than those of some others, since it is single-minded in its duties to the point of excluding all else, its Astartes are no less heroic than those of their fellow Unforgiven Chapters.

It is said that all of the so-called Unforgiven -- the Dark Angels and their Successor Chapters -- are secretive and obsessive to the point that many other Imperial forces shun their presence and eschew their aid.

The Angels of Vengeance are known for their unrelenting hatred of any enemies of the Imperium of Man, as they constantly seek out the threats of xenos, Heretics and apostates so that they may do battle. Potential allies are often cowed by these Battle-Brothers' cold-blooded determination and icy single-mindedness.

The Chapter is so utterly dedicated to its duty that its brethren think or speak of little else. This drive extends beyond a simple devotion to duty, into an all-consuming obsession.

The Angels of Vengeance hold little or no regard for the strategies of other forces, relentlessly pursuing their own battle plans regardless of the schemes others might have set in motion.

On numerous occasions, this behaviour has led to a battle being won at the expense of an entire campaign, the Angels of Vengeance caring only that their own immediate objectives are obtained regardless of the wider picture.

The Chapter's attitude might long ago have led to it being entirely ostracised by any of the Imperium's armies beside which it might take to the field. This is not the case however, for the Chapter's total devotion has on numerous occasions led to it achieving stunning victories and achieving objectives others have written off as unobtainable.

The Chapter's all-consuming dedication to its mission translates into a total rejection of the notion of failure. It is true that the Space Marines of the Adeptus Astartes "know no fear," but the Angels of Vengeance are so relentless and stubborn in their approach to battle that they refuse even to re-deploy.

Even in the face of overwhelming odds, the Angels of Vengeance fight on, frequently emerging from the fires of battle having sustained enormous losses, but having earned such victories as lesser warriors could only dream of.

Other Chapters might regard the Angels of Vengeance as tactically inflexible and stubborn, but none can dispute the roll of battle honours it has earned over the millennia.

This Unforgiven Chapter is known to have suffered severe losses on several occasions in the past due to its absolute refusal to accept that any foe is its equal. This stubbornness has put the Chapter's survival in jeopardy on more than one occasion.

Most of the Unforgiven Chapters follow the Dark Angels' pattern of organisation, and are therefore considered partially compliant with the Codex Astartes. This includes possessing elite formations similar to the Deathwing and the Ravenwing, although they are not named as such.

For instance, the Angels of Vengeance use a Terminator-armoured company known as the "Dreadwing" and a mobile "Raptorwing" to carry out the hunt for the Fallen. Though they have performed admirably, they have not garnered the recognition of their Dark Angels counterparts.

Like the Dark Angels, the Unforgiven Successor Chapters also have a clandestine group, known as the "Inner Circle," who possess knowledge of the Fallen and the true events that occurred on Caliban.

With the influx of newly acquired Primaris Space Marines into their ranks, the Successor Chapters of the Unforgiven have taken great advantage of the innate abilities, superior skills and equipment utilised by their Primaris brethren, and have incorporated them into the ranks of their Chapter's Battle and Reserve Companies.

As suits their aggressive style, the Angels of Vengeance have reported great success in fielding Inceptor Squads alongside their Assault Squads, creating a one-two punch that can quickly collapse an enemy flank.

Several Battle-Brothers of the Angels of Vengeance Chapter have stood a vigil of the Long Watch with the Deathwatch in the Jericho Reach, and done so in such a manner as to earn great honour for their Chapter and all of the Unforgiven.

Although there are many Unforgiven recruiting worlds -- the full number of which is known only to the Supreme Grand Master of the Dark Angels -- the majority of them are Feudal Worlds, much like Caliban was. Over time some recruiting worlds have been lost -- either permanently, such as Grymmport, or for a short period, like the Plainsworld -- but new sites are constantly added.

Upon some of these recruitment worlds, the Dark Angels have built fortress-monasteries -- large, well-defended complexes where hopeful Initiates can compete for the honour of being selected. Other planets have smaller outposts, ranging from a Fortress of Redemption to a mere statue, in front of which ceremonies might take place. The most feral of these planets have nothing but legends of visitors from the sky appearing at regular intervals.

At need, some established recruiting worlds have been given over to Successor Chapters, or vice versa, and much work is done to ensure that any records held by the Adeptus Administratum are soon lost.

For instance, Nachtwald was originally the main homeworld of the Lions Sable, but after their destruction it passed into the control of the Angels of Vengeance, and has since been used primarily by the Angels of Absolution.

The Angels of Vengeance primarily wear black power armour which is reminiscent of the original colours worn by their progenitors, the Dark Angels Legion, during the Great Crusade and Horus Heresy eras.

The Aquila or Imperialis on the chest guard is bone.

Like their progenitors, the Angels of Vengeance utilise the same heraldry unique to the Chapters of the Unforgiven that indicates company designation, which is painted on the right knee guard.

The Angels of Vengeance's Chapter badge is a stylised white skull wearing a red hood and surrounded by a pair of stylised angelic wings, centred on a field of black. 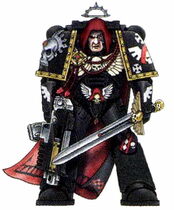