The Angels Vermillion is a Second Founding Successor Chapter of Space Marines created from the gene-seed of the Blood Angels. Its Chapter homeworld Corinal lies in the Eastern Fringes of the galaxy. Alone of the Blood Angels' successors, the Angels Vermillion shun all contact with their brother Chapters, choosing to bear their lingering curse in solitude and isolation. Little is recorded of the Angels Vermillions' actions in the days since the Second Founding, but whenever the Chapter is mentioned, its battle record is nothing short of exemplary. The relief of the Quatandril Templesiege, the banishment of the Daemon Ag’thax’rae’phael on Parnassium, even the desperate campaign known as the Thousand Days of Pain, all of these are shining moments in an otherwise shrouded history. Indeed, there are many among the Blood Angels Chapter Council who advocate efforts to establish closer ties to this elusive Successor Chapter, yet for reasons known only to himself, Lord Commander Dante has always refused.

The Angels Vermillion care little for their relationship with the Blood Angels. They do not wish to be a part of the Blood Angels' wider brotherhood, as they wish to handle the Chapter's flaw in their own way, without the interference from the Blood Angels and their other brother Chapters.

While most Blood Angels Successors maintain close ties with one another and with their sire Chapter, the Angels Vermillion appear to be an exception. An aloof Astartes Chapter, they shun all contact with their brothers who are also descended from the Primarch Sanguinius, choosing to bear their lingering curse in solitude and isolation. Ironically, little is recorded in Imperial records of the Chapter's exploits since the Second Founding, but whenever they are mentioned, their battle record is nothing short of exemplary. While the Chapter has earned numerous battle honours prosecuting the Imperium's wars, they have very rarely been observed fighting in the same war zone as the Blood Angels or another of their Successors.

The Angels Vermillion use the same organisation scheme as the Blood Angels. As such, they are considered a partially Codex Astartes-compliant Chapter, like their ancestral Chapter.

The Angels Vermillion hail from the Chapter homeworld of Corinal -- a planet dominated by bright deserts and a boundless cobalt ocean. Green fringes the edges of the single, massive continent. Five long rivers dig worming emerald valleys across the land. A huge alpine mass at the centre is a striking collection of brown jungle canyons filigreed with white snowy ridges. The poles wear icy caps, bordered by grey tundra that gives way to yellow grassland. But these varied colours of terrestrial life are smudges against the dazzling white sands of the continental interior.

The Angels Vermillion discovered early that by feeding the Red Thirst they can control it. The Chapter kept itself apart for shame, thinking themselves alone afflicted amongst the scions of Sanguinius. Ironically, it seems. For only a handful of Angels Vermillion fall to its ravages each standard year, and it forestalls the onset of the Black Rage for solar decades. All of the Angels Vermillion fall in the end, but in not so great numbers as the rest of the Sanguinary Brotherhood.

Ever since the Second Founding, the Angels Vermillion have been ashamed of the flaw, and the Red Thirst and Black Rage that it brings. In atonement, the Chapter has dedicated itself to wars of penitence, fighting battles that are never even noticed long enough to be forgotten, yet every engagement keeps the light of mankind burning a little longer.

The Chapter believes that the Blood Angels are blind, dazzled by the glory of ancient days that can never return. The Angels Vermillion see Sanguinus as a cursed Primarch, whose death has doomed all of the Blood Angels and their Successor Chapters. The Astartes of this Chapter fully accept the flaw, seeing themselves as monsters when they should be angels. But they live in an era beset by worse monsters, and if embracing the darkness will keep the light shining for a little longer, then it must be so.

Every five solar decades, the Angels Vermillion conduct a ceremony called the Sorrowing. The Chapter drains the blood from mortal-outsiders native to their homeworld and their Chapter Serfs. The victims' bodies are flensed and their bones cleaned, and the corpses are then interred with all honour in the Chapel of the Isle of Martyrs. The Space Marines then bathe in the blood. Into it, the Angels Vermillion pour the essence of Sanguinius by opening the veins of one of the Sanguinary Priests  and drain him unto death. Then the blood is treated again, and prepared into the liquid food of battle. Thereafter it is introduced into each Power Armour's dispensers to nourish the Angels Vermillion in war.

The Angels Vermillion name this ceremony as they do for the burden that it places upon their own souls, knowing that so many innocents must be bled to hold their rage at bay. Nevertheless, the men and women who sacrifice themselves to the thirst of the Angels Vermillion are honoured. They feel no pain. The Angels take no pleasure from the ceremony as they treat the dead mortals who gave their lives up in sacrifice for the defence of Mankind with the greatest respect.

The secretive nature of the Angels Vermillion can come to the fore when its Battle-Brothers are called to stand a vigil of the Long Watch, and others of the Blood Angels or their Successors are present in the same Watch Fortress or Kill-team. Such brethren are well represented in the ranks of the Jericho Reach's Deathwatch contingent, with several senior members of Watch Fortress Erioch's command cadre being drawn from such parent Chapters. It is notable that very few Battle-Brothers of the Angels Vermillion have stood a vigil in the Jericho Reach, and when they have, they have taken every possible step to avoid contact with those of their brother Chapters. Whether or not such individuals serving on the same Kill-team would degrade combat effectiveness or cause internecine strife is unknown, as yet. 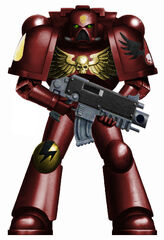 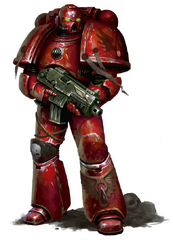 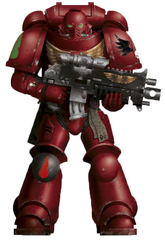