"We are the Angels Encarmine. Every day is a day for death."

As a result, the Angels Encarmine are rarely at full strength, their numbers worn down by the attrition of constant warfare. This issue is compounded by the fact that Chapter's Death Company is always worryingly large.

What the Angels Encarmine lack in numerical strength, however, is more than compensated for in fervour. They have never once denied a request for assistance by Imperial forces, and have won the approbation of Chapter Masters and Planetary Governors alike for their selfless heroism.

For all their glorious victories, it is worrying to note that the Angels Encarmine rarely take to the field in a major engagement without their Death Company numbering at least thirty Battle-Brothers. This observation implies an increasing instability in the Chapter's gene-seed, and an inability to control their spiritual fury within.

The Angels Encarmine share many traits with their progenitor Chapter, the Blood Angels, including the tragic genetic flaw that afflicts so many of the line of Sanguinius. This curse manifests itself in many different ways, but in the case of the Angels Encarmine it has led to a fiery, zealous temperament that drives the Chapter to ever greater heights of valour.

Amongst the Astartes, it is said that no other Chapter is as active or in combat as often as the Angels Encarmine. Their previous Chapter Master, Castellan Zargo, forever sought opportunities to lead his Chapter on campaign against the enemies of Mankind. As a result, this eternal Crusade led to a high rate of attrition amongst the ranks of the Chapter's Battle-Brothers, resulting in the Angels Encarmine rarely being at full strength.

Rarely is any time given over to recuperation, meaning that the Chapter is seldom operating at anything like full strength. Though this Chapter may lack significant numbers of active Astartes, they more than make up for this with their determined fervor in battle.

It has been surmised that the Angels Encarmine fight in this manner as a means of staving off the worst effects of the Blood Angels' gene-seed flaw, but some well-placed observers whisper that perhaps the Angels Encarmine fight the way they do to purge their ranks of those in the grip of the Black Rage. Like their genetic primogenitors, this Chapter suffers from both of the genetic flaws of the Blood Angels, the Red Thirst and the Black Rage.

Those Angels Encarmine afflicted by the Black Rage are placed in a Death Company similar to that deployed by the Blood Angels. It has been noted that this company rarely has less than 30 Astartes, making it larger than that of most of its fellow Blood Angels Successors. This could point to an acceleration in the numbers of Battle-Brothers falling prone to the Black Rage, a fact that would surely have heralded the eventual doom of the Angels Encarmine had the Primaris Space Marines not been inducted into the Chapter after the Devastation of Baal.

The Angels Encarmine adhere to the organisation of the Blood Angels Chapter as laid out in the Codex Blood Angels. As such, they are not a fully Codex Astartes-compliant Chapter, as the Chapter is barely at half strength.

It has been observed that the Chapter's Death Company, the formation into which those suffering the worst of the flaw are grouped, is larger than that of most of its fellow Blood Angels Successors. This could point to an acceleration in the numbers of Battle-Brothers falling prone to the Black Rage, at least before the introduction of the Primaris Space Marines into the Chapter.

The Angels Encarmine share many traits with their progenitor Chapter, the Blood Angels, including the tragic genetic flaw that afflicts so many of the line of Sanguinius. This curse manifests itself in many different ways, but in the case of the Angels Encarmine it has led to a fiery, zealous temperament that drives the Chapter to ever greater heights of valour.

"Five hundred and twelve warriors of the Ork force at Graal IV... the so-called Seer Council of Nalathien, numbering five-and-two-score... Gaius Beregil, the Screaming Prophet of Falkata... Gervhardt of the Seven Sigils, Warlord of the Iron Warriors."

— A selection of the recorded kills of the weapon Red Dawn

The Angels Encarmine's Power Armour is painted red, with black trim and black backpack and a yellow Aquila symbol on the chest plate.

Like all Successor Chapters of the Blood Angels, the Angels Encarmine maintain an elite force of Assault Marines known as the Sanguinary Guard and a Death Company to contain those Space Marines who succumb to the Red Thirst and the Black Rage.

However the colours of their Death Company and Sanguinary Guard are an alabaster white, with black shoulder guard trim and backpack, but still bear blood-red saltires to symbolise the wounds of the the Blood Angels' Primarch Sanguinius after he was slain by the Warmaster Horus during the Horus Heresy.

The Angels Encarmine's Chapter badge is a single, red droplet of blood with a pair of ebon bat-like wings (displayed and elevated) protruding from its sides, centred on a field of red. 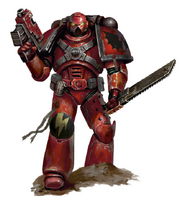 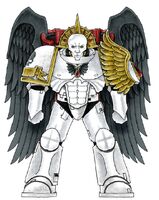 An Angels Encarmine Tactical Marine
Add a photo to this gallery
Retrieved from "https://warhammer40k.fandom.com/wiki/Angels_Encarmine?oldid=351959"
Community content is available under CC-BY-SA unless otherwise noted.