"Raise the flag high. Let those degenerates know who comes to claim their lives this day!"

Each standard has proudly flown over hundreds of battlefields and every Battle-Brother will understand the exact nuance and reference that has been woven into their lavish designs.

The Standard Bearers are chosen specifically for their bravery and steadfastness. They are also a more than capable warrior who is not to be discounted when assessing the Chapter's fighting strength.

The title of "Ancient" is reserved for the standard bearers of the Codex Astartes-compliant Chapters and is considered one of the most prestigious and senior ranks within most Space Marine Chapters.

An Ancient is sworn to carry the standard forward, not to dishonour or lose it, and to die defending it if necessary.

Among the formations of the Primaris Space Marines, a Standard Bearer for a company or the entire Chapter is known as a "Primaris Ancient."

"You know what it is to carry this banner in war. You become the vessel of all of us, the symbol of our unity and strength."


—Chaplain Ortan Cassius, Reclusiarch of the Ultramarines Chapter, explaining the meaning of being the Chapter's standard bearer to its next bearer, Ancient Tortalus

A Standard Bearer is an honourific that heralds back to the bygone Legion Standard Bearers of the ancient Legiones Astartes. These specially chosen individuals were consummate warriors, chosen for the honour of carrying one of the Legion's great standards, making them a rallying point on the battlefield for the Legion's troops.

These chosen Space Marines were members of Legion Command Squads, and had access to the finest wargear available to the Space Marine Legion's rank-and-file and embodied the Legion's honour in war.

In the late 41st Millennium, Ancients continue to uphold the honour of their ancient predecessors as members of a Chapter or company Honour Guard. Chapter Banners are the most sacred artefacts belonging to a Chapter. These banners are very ancient and are only ever carried into battle by the appropriately named Chapter's Ancient. These individuals carry the battle-flag of the Chapter or company in which they serve.

Each standard is an ancient relic, steeped in history and heavy with the glories of the Chapter. An Ancient serves within the Command Squads that accompany the high-ranking Space Marine officers on the field of battle. A Chapter Ancient is recognised by a skull and Imperial Laurel honour worn on their right shoulder plate.

The banner carried by an Ancient is as individual as the Chapter itself and there are few rules to govern its design. The Codex Astartes limits its comment on the Chapter Banner to simply saying that the standard should carry the colours and icon of the Chapter and should display such honours as the Chapter Masters deems worthy.

Venerable Chapters usually possess several Chapter banners, although only one will be in use at any given time. The specific design varies greatly from banner to banner, but all will evoke one of the Chapter's greatest triumphs or some other key moment from its long history.

Though a Chapter may own multiple banners, one, and only one, will be in use at any given time. This battle standard will have been consecrated by the Chapter's senior Chaplain and dedicated to the heroes of the Chapter's past, present and future.

In battle the banner is used to inspire the Space Marines to superhuman feats of martial prowess and woe betide the enemy that threatens this holiest of relics. Eventually these banners age or are damaged beyond repair and they will then be retired to grace the great hall of a Chapter's fortress-monastery.

Furthermore, new Chapter banners may be fabricated to mark great victories or to honour mighty heroes who have fallen in battle. For a Chapter with a long history like a First Founding Chapter, there will be dozens of these venerable and venerated flags in the great hall, each one carefully preserved and honoured by the Space Marines.

"Some have called us the Angels of Death. It is a name well chosen, for we bring redemption to those who need it the most – the cold and final redemption of the grave."

One Battle-Brother amongst the Chapter's Honour Guard may have the distinction of carrying the banner of their Chapter into battle. This is a sacred task, one borne with immense dignity and gravitas.

Whether providing a rallying point to the warriors fighting around him, or racing to defiantly plant the standard upon a contested elevation and in doing so claim the battlefield for his Chapter, the Ancient serves to inspire all around him.

One of the most common specialists found fighting alongside company Veterans in a Command Squad is the Company Ancient. These warriors carry the revered battle-flag of the company in which they serve.

Each standard is an ancient relic, steeped in history and heavy with the glories of the Chapter, and every Space Marine, from the most inexperienced recruit to the hoariest veteran, fights all the harder in its august presence.

The Company Ancient is trusted never to let his banner out of his grip while he still draws breath -- to do otherwise is to invite the most terrible and shameful dishonour.

A Firstborn Astartes Ancient is armed as follows:

A Firstborn Astartes Ancient in Terminator Armour is armed as follows:

A Primaris Ancient is armed as follows: 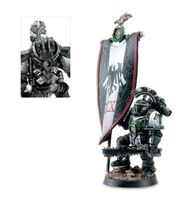 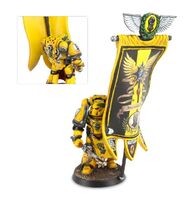 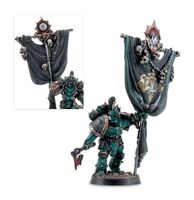 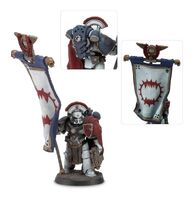 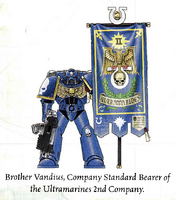 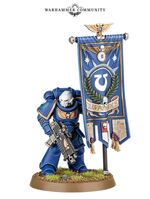 A Primaris Space Marine Ancient of the Ultramarines Chapter