An Anakatis Kul Blade-Slave was a specialist formation of individual warriors of the Word Bearers Traitor Legion that served the will of their dark master, Zardu Layak, the Crimson Apostle of the Chapter of the Unspeaking, during the Horus Heresy in the early 31st Millennium.

Following the Word Bearers Legion's chastisement and humiliation at the hands of the Emperor and the Ultramarines Legion at Monarchia, many within the Word Bearers' ranks felt powerless and cast adrift.

Within some individuals, this ignited a hunger that could not be denied. Zardu Layak preyed upon such Astartes, bestowing baleful gifts upon those whose ambition and hubris outweighed their caution.

These followers became the Anakatis Kul Blade-Slaves -- loyal servants of the Crimson Apostle -- whose bodies became unnaturally warped and contorted and possessed of great strength.

Wielding the Anakatis Blades, gifts bestowed upon them by Layak and weapons of unholy xenos influence and malevolent power, they cut a swathe through their master's foes in a barely controlled hunger for slaughter.

There were always those who hungered for power beyond their appointed measure, even amongst the Space Marine Legions long before the dark days of the Horus Heresy. After their humiliation and censure by the Emperor and the Ultramarines, this became doubly so within the Word Bearers Legion as the sting of their fall left many within their ranks feeling powerless and cast adrift from the bedrock of their beliefs.

For the XVII Legion as a whole this would mark the start of a perilous path. For some within its ranks, it ignited a hunger that could not be denied. It was on such morbid cravings that Zardu Layak, the Crimson Apostle of the Chapter of the Unspeaking, preyed, with baleful gifts in mind to bestow on those whose ambition outweighed their caution, and whose hubris overwhelmed their fear.

These gifts were the Anakatis Blades, dark relics of the time before Mankind, weapons which must be ritually given and freely accepted to work their doom, for they promise unearthly might to any warrior who grasps them, but only if that warrior's spirit and will are strong enough to master the beast within the blade. But this never happened, for Zardu Layak made sure that none he chose to wield the blades was every strong enough to truly master them.

Zardu Layak, the Crimson Apostle of the Chapter of the Unspeaking, and his Anakatis Kul Blade-Slave bodyguards. 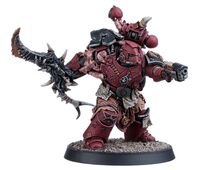 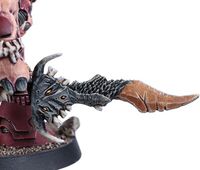 A close-up of an Anakatis Blade -- a baleful and ancient relic weapon that possesses dark and coiling entities within.
Add a photo to this gallery
Retrieved from "https://warhammer40k.fandom.com/wiki/Anakatis_Kul_Blade-Slave?oldid=379703"
Community content is available under CC-BY-SA unless otherwise noted.