"The Dathedian's Curse, they call it. It brings nightnares, fathers lies and robs focus. Yet to those with the inner steel to harness it, it brings great strength. This I will prove to you on the morrow, when I write the doom of our foes in their own blood."

Altansar was a small Asuryani craftworld that survived the Fall of the Aeldari but was caught in the Eye of Terror, its only escapee being the Phoenix Lord Maugan Ra. Ten thousand Terran years after the homeworld of Maugan Ra was swallowed by the Eye of Terror, Abaddon the Despoiler launched his 13th Black Crusade from within its depths in 999.M41.

The nightmarish realm vomited the legions of Chaos into the material universe, leaving a gaping rift between the material universe and that of the Warp. Whilst the Eye was still open, Maugan Ra undertook a perilous quest into its malignant reaches in search of the remains of his people.

Maugan Ra eventually found the remains of his craftworld and guided what was left of it out of the Eye of Terror, and led them against the forces of Chaos. However, there was no celebration or welcome from the other Aeldari craftworlds at the return of their lost counterpart.

The shadowy Aeldari of Altansar were treated with open suspicion and hostility, for it was believed that no Aeldari could remain untouched by the predations of Chaos for so many millennia.

Altansar is known as the sister craftworld of Ulthwé, due to its close proximity to the Eye of Terror. The world-rune used by Craftworld Altansar is known as the "Broken Chain" -- not only in reference to the escape of Kurnous and Isha from the dungeons of Khaine in the Aeldari myth cycles, but also to the shattering of the links that bound Vaul to his anvil.

The symbol has taken on a deeper meaning since Altansar's mysterious escape from the Eye of Terror. The broken infinity loop above the world-rune has only been adopted by the craftworld as its new sigil since its narrow escape from an eternity of damnation.

When Slaanesh surged into existence, many craftworlds escaped the deadly metaphysical pull of the Eye. Altansar was one of the Aeldari craftworlds that survived the Fall of the Aeldari species. It rode out the psychic shock waves that destroyed the ancient Aeldari Empire following the birth of the newest Chaos God, but was subsequently caught in the gravity well of the newborn Warp rift now called the Eye of Terror.

Although the Aeldari of Altansar struggled valiantly against the encroachment of Chaos, their doom was inevitable, and within five hundred agonising years their craftworld was swallowed by the Warp. Amongst the entirety of Altansar's population, only the Phoenix Lord Maugan Ra escaped the craftworld's consumption by Chaos.

Ten thousand years later in the 41st Millennium, Abaddon the Despoiler emerged from the insane reality of the Eye of Terror, at the head the 13th Black Crusade of the forces of Chaos. The Chaos Traitor Legions' intrusion into reality left a rift which bridged the material universe and the universe of the Immaterium. Through this opening, Maugan Ra undertook a great odyssey into the Eye of Terror in search of the remains of his people.

Leaving a silvered trail of soulfire behind him, Maugan Ra eventually found the remains of his lost craftworld. He found that the Asuryani of Altansar had indeed survived ten thousand years within the Eye. Maugan Ra guided the remnants of his craftworld out of the Eye of Terror and against Abaddon's forces to deny him ultimate victory.

However, there was no celebration or welcome from the other craftworlds. Since their reemergence, the people of Altansar have been distrusted by their kin. Some whisper they are tainted by their ordeal, others that they entered a dread pact with Ynnead. Perhaps the rumours are based in truth, for it is said the Asuryani of Altansar never remove their helms, and speak only in whispers.

During the 13th Black Crusade, the Phoenix Lord Maugan Ra led an elite force of Asuryani Dark Reapers and Black Guardians from the craftworld of Ulthwé into the Eye of Terror in search of Altansar. It was during this pilgrimage that he found the Belial Hex System and the Crone World of Belial IV, located deep within the Eye of Terror.

Despite several early victories and the aid of the Harlequins, a daemonic counterattack forced the Aeldari back. As they reeled from their losses, the Craftworld Altansar drifted into Belial's orbit, proving that it still existed and had survived ten millennia within the Eye of Terror.

The Asuryani of Altansar then joined their brethren from Ulthwé, defeating the daemonic forces and helping the Aeldari to reclaim one of their lost Craftworlds.

Maugan Ra then led the Craftworld back through the bridge between the Warp and the material universe, and used his remaining troops to help battle the forces of Chaos and bring an end to the 13th Black Crusade.

Currently, Craftworld Altansar is somewhere close to Terra, although how it has managed to get that close to the heart of the Imperium without Imperial retaliation is unknown.

Aeons spent adrift in the Eye of Terror have forever altered the warriors of Altansar. The stained reddish purple of their armour evokes the seas of blood shed by their people in the craftworld's defence; the white the bones of their ancestors.

Warriors of Altansar also wear the colour black in honour of Maugan Ra -- first of the sinister Dark Reapers -- for it was he who found them within the Eye of Terror and freed them from its perilous grip. 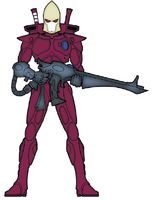 An Aeldari Guardian of Craftworld Altansar. Note the bone-white coloured helm, which symbolises the bones of Altansar's ancestors. 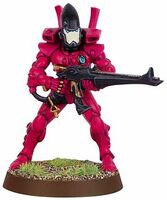 Aeldari Guardian of Craftworld Altansar in combat armed with a Shuriken Catapult.
Español
Community content is available under CC-BY-SA unless otherwise noted.
Advertisement