"Burn the heretic from his lair. Put the torch to his foul idols, and cast all that he treasures into the flames. Only then, when he realises the true cost of his perfidy, grant unto him the oblivion he deserves."

An Aggressor, who is usually a member of an Aggressor Squad, is an Astartes fire support specialist unique to formations of Primaris Space Marines.

Aggressors are tasked with close-range fire support and have been outfitted with modified suits of Mark X Gravis Power Armour refitted to carry a shoulder-mounted Fragstorm Grenade Launcher.

They also wield Flamestorm Gauntlets that unleash blazing streams of promethium upon any foes that get in close -- or can be used to wade into the mobs of the enemy and unleash an inferno that burns them all to ash.

The Space Marines in a Chapter's fire support squads have a vital role, for they provide covering fire to their battleline and close support brethren. This could be in the form of assassination of prime targets, counter-battery volleys, or the destruction of enemy armour. By their target selection, marksmanship, and the timely application of firepower are countless battles won.

Clad in heavy Mark X Gravis battle-plate, Aggressor Squads advance upon the foe as walking fortresses of ceramite. Each member is equipped with a pair of Boltstorm Gauntlets, meaning an Aggressor Squad can lay down a hail of bolt fire.

Aided by back-mounted Grenade Launchers, an Aggressor Squad can wade into oncoming enemies, mowing a bloody path through even the largest of hordes. Should a foe actually have enough bodies to sacrifice so that living members can finally reach the source of the onslaught, they are met by Space Marines swinging paired Power Fists. Very few live to tell the tale.

More mobile than the heavily armoured Centurions due to their sophisticated Gravis armour, Aggressors are better able to negotiate rough ground. This makes them a more versatile troop type; while they are often employed in specific circumstances or on certain terrain, Aggressor Squads are also used as reserves to plug breaches in gun lines or to spearhead an advance.

In dense environments, such as within a hive city or under the canopy of a forested area, Devastator Squads would find their long-ranged weapons of little value. Such terrain suits Aggressor Squads to a tee, however, as they are perfectly suited to firing on the move. The range of their weaponry is not long, but when they get close enough to open fire, the result is a sweeping fusillade of large-calibre Bolter shells that can shatter enemy charges.

For especially dense terrain, or when facing foes that cover the ground in great number, Aggressor Squads will wear paired Flamestorm Gauntlets. When equipped this way, their armour's raised shoulder guards protect against the inevitable flame backwash as they stride forward, their arms sending sweeping arcs of fire billowing out.

Fire flickers like a hellish wreath about their armour as the Aggressor Squad advances, their weapon barrels glowing like embers in the smoking gloom. Ork hordes and Tyranid swarms alike are incinerated, their brittle and blackened bones crackling to dust underneath the tread of the Aggressors as they march straight into where the fighting is thickest. Some have said the Aggressors live for such moments, and dwell over-long upon them.

Since being introduced during the Ultima Founding and Roboute Guilliman's reworking of the Codex Astartes after his resurrection in 999.M41, the Aggressor Squads have proven themselves as a devastating force many times over.

The Iron Hands were quickly converted after they witnessed an Aggressor Squad attached to their 2nd Company wade into a sea of Greenskins, their blazing guns stitching patterns of death that riddled mob after mob with fist-sized holes. The Black Templars, ever eager to advance upon the foe rather than sit back and shoot, have had great success fielding Aggressor Squads alongside their Crusader Squads.

No Chapter has made better use of Aggressor Squads than the Salamanders. On the battlefields of Tulsar, it was an Aggressor Squad that ensured Captain Tu'shan did not meet his end at the axe-blade of Khaz'khul.

In the Prime Hive of Ultak, it was the 3rd Company's Aggressor Squad that pitted their flames against the blue fire of Tzeentch's Horrors, allowing the Planetary Governor and his council to escape to safety.

Like the fabled creatures of Nocturne after which the Salamanders were named, the Aggressor Squads of the Salamanders emerge out of their own flames, their weapons, armour and red eyes glowing bright. One squad assigned to the 3rd Company -- the Pyroclasts -- has already earned their squad's honorific name in the fires of war. While combating the Ork WAAAGH! of Warlord Gharka, this Aggressor Squad used their Flamestorm Gauntlets to ignite an entire mob of onrushing Ork Skorchas.

The Greenskins' crude flamethrowers could not stand the heat, and their tanks of Promethium exploded in a conflagration that spread across the battlefield, engulfing Orks by the hundreds. In the gloom beneath that mushroom cloud the ash fell like a black blizzard, but emerging from that hell, still wreathed in flame, were the Pyroclasts' Aggressor Squad. In the wake of their victory, the squad were rechristened as "the Infernal." 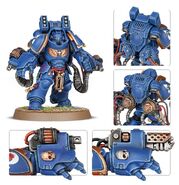