Warhammer 40k Wiki
Register
Don't have an account?
Sign In
Advertisement
in: A, Galaxy, Imperial History,
and 2 more
English

The Agathean Domain, also known in some sources as the Agathon Domain, is an alliance of several interlinked star systems in the northern Segmentum Obscurus dominated by the Hive World of Agathon.

The Domain is not truly big enough to be warranted true sub-sector status. It is the outermost and final anchor point of the Imperium of Man before the dark frontier of the galactic north.

At its centre lies the thriving world of Agathon, a Hive World that bears strong resemblance to such famous Hive Worlds as Necromunda or Khur, despite the fact that these worlds are thousands of light years away from Agathon's border.

The system rightly counts as one of the most isolated of the Imperial realm, being surrounded on three sides by the galactic void and only accessible through the tenuous Warp routes of Numinal which link it with the other worlds of the Coronid Reach and the Manachean Commonwealth.

The Agathean Domain is located in the outer region of the Segmentum Obscurus where it borders the Ultima Segmentum.

This region of space is one of the oldest centres of human habitation, and the initial human colonisation of Agathon may well lie back as far as the early Age of Technology. Not all the worlds of the Agathon System had been bereft of intelligent life, as a highly substantial population of Ogryns was discovered on the Feral World of Othion.

Surviving both the horrors of Old Night and the lurking dangers of the Age of Strife relatively unscathed, Agathon's surface has always been dominated by the three spires that constitute its principal hive cities. But integration into the Imperium was not swift, nor was it without bloodshed, as Agathon resisted for nearly fifteen standard years against Rogue Trader fleets and smaller Expeditionary Forces.

Imperial Compliance was only achieved through the mobilisation of a far-larger force, the 60th Expeditionary Fleet which had already achieved several successful Compliances but was now severely depleted. At its core stood the 1522nd Solar Auxilia Cohort, also known as "The Lord Marshal's Own," under the command of the famed Lord Marshal Ireton MaSade.

This tactically-brilliant general would lead the 60th Expeditionary Fleet in a successful, if bloody, Imperial Compliance action that would see the purge of the cultic aristocracy that ruled Agathon and its domains added to the Imperium of Man.

In reward for this final victory and a lifetime of service, MaSade and his officers were awarded the right of conquest over Agathon and became the new ruler of its five billion inhabitants. The 60th Expeditionary Fleet was disbanded and most of its vessels entered the Agathon System Defence Forces whilst its troopers became the world's new ruling elite.

These loyal subjects of the Emperor who had fought countless wars in His name would see that Agathon became one of the most productive and organised worlds of the Segmentum Obscurus Orient; for the descendants of the 1522nd Cohort would guarantee that their world would ever be ready to fight for itself.

By the closing days of 006.M31, following the fall of the worlds in the Cyclops Cluster, local Imperial powers were girding for war. Though still distant from the front lines of this new civil war that now ravaged the domains of the Imperium, the leaders of the Agathean Domains knew that they could not stand alone against the might of the Warmaster Horus' Traitor Legions and the forces he had already arrayed behind him. So it was that when Grand Admiral Ospheus LaBray called for a mustering of Loyalist vessels at the Armada Imperialis base at Port Maw, the Agathean Domain sent out a full Cruiser squadron bearing the best of the Agathean Domain to reinforce the gathering warfleet.

Severely damaged during the Treachery at Port Maw, the surviving Agathean Cruiser, the Telemachus, limped back to its homeworld bearing word of Horus' victory and the betrayal of the Emperor by the Cyclothrathine Mechanicum. On board the Telemachus also rested the stasis-held corpse of her former captain, Jocasta MaSade, granddaughter of Ireton MaSade. Despite being mortally wounded, she had valiantly refused to be treated as long as her ship was not yet safe and successfully escaped pursuing elements of the Traitors' fleet before succumbing to her wounds. The arrival of the Telemachus would spark the powder keg of fear and political divisions that had been fermenting on Agathon.

Agathon's isolation had protected it from the Warmaster's gaze because as a relatively minor Hive World compared to those of the nearby Manachea System it held little strategic value and had hence been completely bypassed by the Traitors' armed forces. The fear inspired by the fate of such neighbouring worlds as Manachea or Moab grew into civil unrest until even Agathon's Parliament of Electors slipped into open conflict.

Debates raged between die-hard Loyalists, those that would cast their lot with Horus in fear of the consequences of not doing so and those who would secede entirely from the Imperium and return Agathon to independence. Blackmail, threats and assassinations were rife as the wheels of the Agathean government became paralysed and the Hive World teetered on the precipice of all-out civil war.

Into the warring chamber of the Parliament of Electors came Ireton MaSade, nearly two Terran centuries old and almost a recluse for two solar decades. He had not come alone, for behind him was the body of his granddaughter, carried upon an anti-gravitic, floating stasis bier and flanked by a troop of Solar Auxilia Velitaris armoured in a livery of ice white in deference to Agathon's traditional colour of mourning.

Stunned into silence by this most unexpected appearance, the Chamber was forced to listen as Ireton MaSade spoke, first of grief and sacrifice, then of the dream of the Imperium, of human unity and the Imperial Truth. As his oratory turned to rage at the moral weakness of his successors, he denounced the Parliament and declared them traitors to the Emperor as the funeral guard turned their Volkites on them and burned the fractious noblemen to ashes.

Agathon and the other worlds of the Domain would be placed under martial law and controlled by the "Old Guard" of the 60th Expeditionary Fleet and their direct descendants. Almost immediately, Agathon's economy and society were put on a war footing not only in order to defend their Domain but to mount an attack on the Traitors. One way or another, Ireton MaSade would have his vengeance, no matter the cost.

The culture of Agathon possesses an overriding military aesthetic and the world's military forces, the Agathean Cohorts, can boast a direct lineal descent to the initial Solar Auxilia Cohort of the 60th Expeditionary Fleet. Trained and equipped in the traditions of the Solar Auxilia, the Agathean Cohorts form a sizable and impressive military host with the resources of an entire star system at their disposal. Their reputation for excellence has been well-deserved, as they have successfully defeated alien invasions and would go on to distinguish themselves during the dark days of the Horus Heresy and the Imperium's campaigns.

Descending from a proud military tradition, Agathon has mostly conserved the trappings and emblems of its founders. As such the Equis Astra, the original emblem of the 60th Expeditionary Fleet, can often be found next to the reconstituted sigil of the 1522nd Cohort.

As its name indicates for those versed in High Gothic, the Equis Astra is a typical horse head-emblem the like of which has been in use for uncounted millennia, with the Agathean variant fielding a white horse head on a green field. At the time of the Horus Heresy, this emblem was commonly worn as a cross-unit badge of unity.

The 1522nd Cohort's emblem is an antique crested helmet as worn by the legendary Spartans of Old Terra. It is perhaps in reference to these legendary warriors that the Agatheans' primary colours are noted as dark bronze and green, supplemented by white details where needed.

The martial tradition of the Solar Auxilia lives on in the Agathean regiments of the Astra Militarum which have since then acquired great honour in the service of the Imperium. To this day, Agathon still greatly contributes to the Imperial war effort within the Segmentum Obscurus. More recently in Imperial history, the Agatheans' courage and sense of duty was commended in 932.M41 for their defence of the Agri-world of Jollov in the Ghoul Stars region against the Tyranid menace.

Through their valiant efforts at the side of other Imperial Guard regiments as diverse as the Catachan Jungle Fighters, Mordian Iron Guard and regiments drawn from the worlds of Kanak and Molov, the Agatheans ensured the withdrawal of Techno Magus Stannum Vir and the valuable STC fragments he had uncovered on Jollov before being overcome by the chitinous hordes of Hive Fleet Moloch.

Banner of the 1522nd Agathean Cohort 'The Lord Marshal's Own' 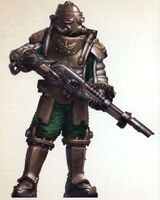