Adrathic Weapons are a type of ancient directed energy disintegration weapons that date back to the Dark Age of Technology, utilised exclusively by the Legio Custodes, the elite bodyguard of the Emperor of Mankind. It is unknown if these weapons are still in the arsenal of the Adeptus Custodes of the 41st Millennium.

Relics of the Dark Age of Technology, Adrathic Weapons are believed to be all but unique to Terra. Adrathic weaponry uses a potent but dangerously unstable directed energy beam to sever the internal bonds of matter, causing objects caught in their path to unravel in a spectacularly destructive manner, leaving only a flaring after-image of what was. Such weapons were legend during the Age of Strife, and devastating wars were fought on anarchic Old Terra solely over the possession of some unearthed cache of Adrathic Weapons and the promise of the power they held.

When the Emperor came to dominion and ended Old Night on Ancient Terra in the Unification Wars, all Adrathic Weapons were given over to Him on pain of death, not simply to the one who retained them but to their entire land and nation such was the importance He placed on controlling this technology. These weapons have remained in His care ever since, and only His own personal weaponsmiths gained and kept the knowledge of how to replicate them in small numbers, much to the jealousy of the Mechanicum of Mars.

The Adrathic Destructor is a portable variant that was utilised on a Custodian's Guardian Spear, or as a twin-linked version by Aquilon Terminators.

The Adrathic Devastator is a heavy pattern of Adrathic Weapon mounted upon Gyrfalcon Pattern Jetbikes, and also deployed as a twin-linked variant by Pallas Grav-Attack vehicles.

The Adrathic Exterminator is a heavy pattern of Adrathic Weapon mounted upon various vehicles utilised by the Adeptus Custodes. 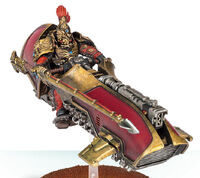 A Gyrfalcon Pattern Jetbike with a hull-mounted Adrathic Destructor.

A Custodian of the Tharanatoi wields a variant Guardian Spear, known as an Adrasite Spear. Instead of utilising the usual built-in Bolter, it instead incorporates the dark relic weapon known as an Adrathic Destructor.
Add a photo to this gallery
Retrieved from "https://warhammer40k.fandom.com/wiki/Adrathic_Weapons?oldid=320623"
Community content is available under CC-BY-SA unless otherwise noted.