Warhammer 40k Wiki
Register
Don't have an account?
Sign In
Advertisement
in: A, Characters, Imperial Characters,
and 5 more
English

"My chief weapons are surprise and fear."

Adrastia, also known as the "Scion of the Emperor" by the Aeldari Autarch Kayleth of the Alaitoc Craftworld, is an Inquisitor of the Ordo Hereticus and one of the main characters in the PC Game, Dawn of War II - Retribution, the second expansion pack to the real-time strategy computer game Dawn of War II.

Clever, proud and idealistic, she is a firm, Puritan adherent of Imperial dogma. She came to the Sub-sector Aurelia to investigate whether the accusations that the Blood Ravens' Chapter Master Azariah Kyras had been corrupted by Chaos were true. The results of that investigation helped to unleash the Third Aurelian Crusade.

Adrastia is a senior-ranking Inquisitor of the Ordo Hereticus. She, alongside Lord General Castor of the Astra Militarum's Cadian Shock Troops, were ordered to the Sub-sector Aurelia to investigate charges of heresy levelled by Captain Gabriel Angelos of the Blood Ravens Space Marine Chapter against his Chapter Master Azariah Kyras.

She hoped to complete her investigation ahead of the arrival of an incoming Exterminatus fleet, which had been given orders to enact Exterminatus upon all of the sub-sector's worlds to remove their growing Chaotic and xenos taint from the Imperium. Her mission was one of dire importance as it would determine the fate of the sector.

However, as a Witch Hunter, she deemed the accusation against Kyras to be extremely serious and warranting investigation -- a heretical Space Marine Chapter Master and Chief Librarian was the epitome of what the Witch Hunters sought to root out and destroy. To this end, she was willing to employ any tool necessary to investigate him -- be they Imperial, Aeldari, or even Orks.

Clever and proud, at her core Andrastia is an idealist -- she believes in Imperial dogma without any doubt and performs her duties accordingly. When Adrastia arrived in the Sub-sector Aurelia she felt that the sub-sector's inhabitants had brought their own impending doom down upon themselves through their cowardice and lack of faith in the God-Emperor.

This was readily apparent by her haughty attitude and the utter contempt she openly displayed when dealing with the local populace. Her demeanor is both cavalier and bemused, and like many of her kind, she is often unconcerned about the feelings of those who are her subordinates.

One of Inquisitor Adrastia's quotes in-game is "My chief weapons are surprise and fear!" This is a reference to the Spanish Inquisition trio in a famous skit of the British Monty Python's Flying Circus comedy troupe. 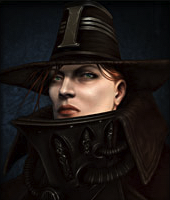 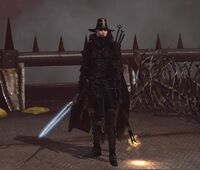