"A planet's skies are a battlefield, just like any other. Understand them. Dominate them. Drive your foe from them without mercy. In this way will you secure victory."

The transhuman warriors of the Adeptus Astartes maintain their own combat aviation arms led by their Techmarines who serve as pilots to provide tactical air support for their ground-based battle-brothers.

Space Marine aircraft squadrons hurtle down from orbit, spat from launch rails and embarkation decks aboard their sleek and deadly warships.

These elite aerial formations punch through their enemies, executing fearless headlong attack runs to smash their targets from the sky or obliterate them on the ground.

Well-armoured, heavily-armed and flown by warriors possessing superhuman skill and swiftness, few aircraft squadrons can match those of the Adeptus Astartes for combat effectiveness. Space Marine pilots do not have the numbers possessed by most of their enemies, but neither do they need them.

From the sleek Stormhawk Interceptors to the hulking Stormraven gunships, Space Marine aircraft represent the pinnacle of Imperial vehicle technology.

Replete with the secrets of the Omnissiah, built upon the ancient wisdom of treasured STC templates, these exceptional aircraft are as robust as they are festooned with firepower. The thrust generated by these centuries-old combat aircraft would be too much for an unaugmented human to handle, and would likely kill them with sheer g-forces.

The pilots of the Adeptus Astartes have no such problems, applying their enhanced strength and reaction times to squeezing an incredible level of performance out of their aircraft.

Every manoeuvre performed by Adeptus Astartes squadrons is perfectly coordinated, every volley of firepower deadly accurate. Return fire splashes from their armoured hulls, if it strikes home at all. So resilient and powerful are Space Marine aircraft that even a single squadron of them can tear apart a much larger air or ground force.

The combat doctrines of different Space Marine air forces vary depending upon the temperament of the Chapter from which they hail. Blood Angels pilots take to the skies with the instinctive skill imparted by the legacy of their winged Primarch Sanguinius, for example, flying with an aggression that would be suicidal in lesser warriors. By comparison, White Scars pilots glide upon the winds like hunting hawks, circling their prey before striking in sudden stooping dives.

Whatever differences of character exist between the Chapters, in almost all cases, it is their Techmarines who pilot their fighters and gunships. It is a testament to the versatility and skill of these warrior-artisans that the Techmarines who operate tanks and artillery, or effect battlefield repairs upon their Chapter's machineries, are the same that fly to war in the pilot seats of their aircraft.

During isolated operations, it is common for Techmarine pilots to fly solo, supporting their battle-brothers on the ground with only the aid of their crafts' Machine Spirits (artificial intelligence routines). In more protracted campaigns, or when the enemy deploys a strong aerial presence, the Techmarines will instead band together into squadrons, groups and divisions in order to maximise their strategic impact and survivability.

In such groupings, those Techmarines with the closest rapport with the Machine Spirits of their aircraft normally assume the role of squadron leaders. It is also during long and bloody campaigns that the greatest Techmarine pilots rise to ace status, earning unique honours within their Chapter for their feats of incredible aerial combat, while spreading abject terror amongst the enemy.

Disciplined psychic warriors with minds hardened against the horrors of the Warp, Grey Knights Techmarines pilot their Stormraven gunships into battle no matter the insanity they face.

Through skies of screaming fire and melting, ghoulish visages, the Grey Knights' Stormraven squadrons fly pure and true. The foul energies of the Empyrean cannot penetrate the wards worked into the gunships' hulls. The cacophonous howls of the daemons without find no purchase upon the souls of the holy warriors that ride within the Stormravens' holds.

Most commonly, the primary role of Grey Knights Stormravens will be as combat transports, squadrons of silver-hulled aircraft swooping down to disgorge the elite battle-brothers of the Grey Knights into the very heart of battle. In the process, the Techmarine pilots may find themselves dogfighting with monstrous winged Daemons, weaving between coruscating Warp blasts or around savage axe swings that could split a gunship in two.

Throughout it all, the pilots remain utterly fearless, their formations perfect and their blessed weapons blazing to hurl the Warpspawn back to the hell from which they came.

Swift and sinister, the aircraft squadrons of the Dark Angels flit across the shadowed skies like flocks of ominous carrion crows. They are darkness and death, the shroud that falls inescapably upon the heretical and the guilty and erases them from the galaxy without a trace.

The Dark Angels are unusual amongst the Chapters of the Adeptus Astartes in that their aircraft are not piloted by the Techmarines of their armoury. Instead, these agile hunting craft are flown into battle by the expert operatives of the Dark Angels 2nd Company, the Ravenwing.

The Ravenwing are tasked with rapidly locating and violently eliminating the enemies of the Emperor. They are an elite brotherhood, highly specialised in their methods of warfare to the degree that not a single Battle-Brother of the Ravenwing fights on foot. All are trained to ride into battle astride roaring Space Marine Assault Bikes, to pilot the anti-grav skimmers known as Land Speeders, or to fly the infamous Nephilim Jetfighters and Ravenwing Dark Talons that make up the Dark Angels air force.

Ravenwing operatives are trained to gather extensive battlefield information at all times, drinking in every scrap of Vox-intel, energy signature recognition and augur-analysis to build an unparalleled strategic picture of the battlefield around them. They specialise in locating even the most elusive prey and running them to ground, forming an ironclad net of machines and potent firepower, all directed by warriors as meticulous as they are merciless.

In short, the seamless coordination between the ground forces and aircraft squadrons of the Ravenwing makes them one of the finest hunting forces in the galaxy. The hidden reason for this specialisation is bound up with the Dark Angels' hunt for the Fallen.

It is a quest that entirely consumes the shadowed upper echelons of the Chapter, and one that must never come to light in the eyes of any other Imperial institution. The Dark Angels field dozens of aircraft squadrons and can further augment these with the wings of their Successor Chapters -- the Unforgiven -- turning the skies black with aircraft should such measures be necessary to keep their secrets.

Just as the longboats and spear-galleys of the Fenrisian tribes bear their warriors into battle, so do the Stormwolf and Stormfang Packs of the Space Wolves ply the storm-tossed skies of countless alien worlds, ferrying the warriors of the Great Companies into the Allfather's galactic wars.

Fenris is a Death World, an elemental maelstrom of ice storms and fiery volcanoes in which only the hardiest can hope to survive. The skies of this deadly planet are wild and turbulent, riven by tempests whose winds scream at hundreds of Terran miles per hour. It is in such conditions that the Iron Priests of the Space Wolves learn their skills as pilots.

Iron Priests fly by their instincts as much as by their instruments. They quickly learn to trust their guts amid magnetic fluctuations and blinding ice-storms that can render even the most powerful Augurs useless. The warriors of the Space Wolves possess the sharpest senses of any Chapter, and it is from these senses that the Fenrisians get their near-supernatural ability to retain pack coherency and locate their targets in even the most impossible conditions.

Microscopic changes in air pressure, particulate scents scattered upon storm winds, the faintest visual shadows glimpsed in the corner of the eye, all provide the Iron Priests with a wealth of information by which to fly.

This is not the only way in which the Space Wolves pilots allow instinct to guide them. Rather than deal in formal ranks, a group of Iron Priests forming a Pack will swiftly establish who amongst them is the alpha. This individual assumes Pack command, deferring in turn to those they sense are most worthy of the honour of being group and wing commanders.

All Space Wolves are superstitious by nature, and their Iron Priest pilots are no exception. Alongside their ad hoc Pack markings, many pilots daub runes in wolf's blood upon the hulls of their aircraft, or else hang tribal fetishes from gunports and rivets; this is meant to draw the eye of Morkai, and ensure his blessing in the battles to come. 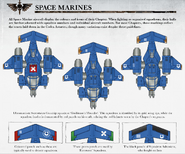 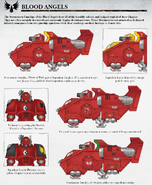 Stormtalons of the Imperial Fists and Iron Hands Chapters.

Stormtalons of the Salamanders and Crimson Fists Chapters. 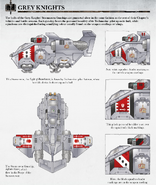 A Stormtalon of the Black Templars Chapter and its Chapter's common aviation markings.

A squadron of Dark Angels Nephilim Jetfighters belonging to the Ravenwing Company and displaying the Chapter's common aviation markings.