The Acastus Knight Porphyrion is one of the most heavily armed and armoured chassis of Imperial Knight ever produced by Imperial technology, a design that essentially sacrifices the mobility valued by most Knights for greater firepower.

Even at the height of the Great Crusade Acastus Knight Porphyrions were incredibly rare and only a few Households were able to field Acastus armours. In the late 41st Millennium, they are even rarer; ancient reminders of the Adeptus Mechanicus' lost power and technological mastery.

The reasons that led to the development of the Acastus Knight chassis are lost to time, and even at the height of the ancient Mechanicum's power the design was incredibly rare -- even the greatest and most powerful Knight Households such as House Raven or House Vymar could only field a handful of them. The rarity of Acastus Knights meant that they were venerated as symbols of favour by the lords of the Cult Mechanicus and physical incarnations of the Machine God's power. Only the great God-engines of the Collegia Titanica, the mighty Titans, are held in higher esteem by the servants of the Omnissiah.

To the wider Mechanicum, the Acastus Knights represented both battlefield supremacy weapons and physical icons of the Machine God's divinity, a symbol of control and lethal sanction. The Porphyrion-variant of the Knight Acastus is usually seen as the ultimate enforcer of a Knight Household's rule and dominion over its Scions. Many of the pilots of these Acastus Knights Porphyrion bore an unique distinction and displayed the heraldic Shrouded Urn, a dread charge only given to those Knights who had destroyed one of their brothers in sanctioned and ritual trial-by-combat. As "kin-slayers," many of those who bore the Shrouded Urn were shunned by their fellow Knights, and as a result some of the Scions and Seneschals of the Knight Households began to regard the Acastus Knights with considerable misgivings because of this dark reputation.

Although its power is undeniable, this class of Knight armour is generally held in lesser regard than the other patterns of Knight. This may well be because of the Porphyrion's focus on ranged weaponry and its lack of close combat abilities which do not allow it to enter melee combat where the greatest battle honours for Knights can be won. For others, the bulk and scale of the Acastus Pattern armour, which almost rivals that of a Warhound-class Titan, reach the very limits of what a single mind, however well-trained, may control. Therefore, mastering and piloting an Acastus Knight Porphyrion puts the Scion's mind under phenomenal stress, a strain only the strongest and most ruthless Knights may bear.

As illustrated by the events surrounding the Donatos Uprising and the fate of the lord of House Wyvorn, even well-prepared Nobles do not always possess the required strength of mind to master an Acastus Knight's immense power and emerge unscathed from their psychic bonding with such a powerful engine of destruction.

One of the most heavily armed and armoured of all the Knight chassis in service, the Acastus Knight Porphyrion rivals even the Scout Titans of the Legio Titanicus in terms of size and power. Armed with weapons that can obliterate even the most heavily armoured target, it is truly a force to be reckoned with.

Taller than even the towering Cerastus Knights, the Acastus Knight Porphyrion is a dominating presence on the battlefield. The Knight's main weapons are a pair of twin-linked Magna Lascannons, devastating weapons an order of magnitude more powerful than even the Sollex Pattern Heavy Lascannon of the Mechanicum Taghmata.

Where a Knight Paladin may carry a Heavy Stubber as a secondary weapon, the Porphyrion is armed with a pair of Autocannons which are often replaced with Lascannons when additional anti-armour firepower is necessary. Its Ironstorm Missile Pod has a substantially larger payload than those found on more common Knights, though in battle-zones where the danger from airborne assault is apparent, this system can be replaced with powerful Helios Defence Missiles.

The specifications of this Knight armour have not been publicly released by the Adeptus Mechanicus. 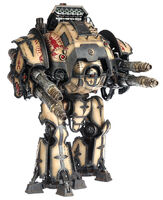 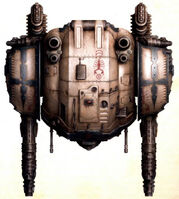 A House Malinax Acastus Knight Porphyrion (top view)
Add a photo to this gallery
Retrieved from "https://warhammer40k.fandom.com/wiki/Acastus_Knight_Porphyrion?oldid=349097"
Community content is available under CC-BY-SA unless otherwise noted.