The Acastus Knight Asterius was a massive, super-heavy pattern of Imperial Knight deployed during the Great Crusade and Horus Heresy eras. This pattern of Knight was specialised for long-range firepower and destroying fortifications.

Of the gigantic Acastus Pattern Knights, some of the largest such war machines still in existence, the Asterius is among the most rare.

Like its more common cousin, the Acastus Knight Porphyrion, it boasts an armoured hide near impervious to weapons fire, striding across the battlefield like an angry giant beset by insects, and also wields a pair of twin ancient Conversion Beam Cannons.

These weapons are irreplaceable relics of a lost technology, each capable of sundering the walls of mighty fortresses and laying low powerful foes in a single blast.

The Asterius is even more immense than most other Knight classes, standing almost as tall as a Scout Titan. Its bulky frame was home to an impressive array of long-ranged firepower, which allowed it to lay waste to the Emperor's enemies from afar.

Acastus Knights were already rare in the age of the Horus Heresy, and Asterius patterns were even more scarce than Porphyrions. Like its counterpart, they were amongst the most massive and formidable engines of destruction available to Knight Houses.

These mighty behemoths were armed to raze the mightiest edifices with Conversion Beam Cannons -- even its secondary weapons were deadly in their own right.

One of the most heavily armed and armoured of all Imperial Knight chassis, few Houses are able to muster Acastus suits. They are therefore seen as symbols of favour by the lords of the Omnissiah's cult, and even the greatest Knight Houses only claim a handful of these savage machines.

To the ancient Mechanicum, they represented the double purpose of serving as a battlefield supremacy weapon and as an icon of the Machine God's divinity -- a symbol of control and lethal sanction. 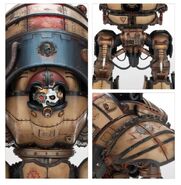 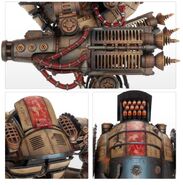 Details of a House Malinax Acastus Knight Asterius' twin-linked Conversion Beam Cannon and its Karacnos Mortar Battery.
Add a photo to this gallery
Retrieved from "https://warhammer40k.fandom.com/wiki/Acastus_Knight_Asterius?oldid=349126"
Community content is available under CC-BY-SA unless otherwise noted.