"You are all here because you are scum, but you're the God-Emperor's scum. You have skills that are useful to Him and whether you wish it or not, they will be made use of."

The 13th Penal Legion of the Imperial Guard, also known as the "Last Chancers," is a special regiment composed of Imperial criminals and convicts. All the men and women of the Last Chancers are hand-picked by the fiercely uncompromising Colonel Schaeffer for the performance of suicide missions on behalf of the Imperium of Mankind throughout the galaxy. The convicts are given a "last chance" by Schaeffer to be forgiven of their crimes in the eyes of the Emperor of Mankind and this is achieved by receiving an Imperial pardon from the Colonel. These pardons are awarded only to those members of the regiment who survive a number of military operations determined by Schaeffer. Colonel Schaeffer personally pardons all those who die during an operation posthumously.

The 13th Penal Legion, unusual among the many Penal Legions that serve in the Imperial Guard, was in fact a testing ground. Schaeffer would hand-pick his regiment's troops from Imperial prisons' worst convicts because of some natural talent they displayed or because they possessed an uncanny instinct for survival so that they could serve as part of an elite ad hoc military team intended to achieve some difficult, usually borderline insane military mission objective of the Imperium. These dregs comprise the most vicious, ill-disciplined and unstable group of psychopaths, conspirators, thieves and traitors in the Imperial Guard who would otherwise be destined for the firing squad or the business end of a Commissar's Bolt Pistol. Many of those offered the chance to fight with the "Last Chancers" choose death rather than follow Colonel Schaeffer, for such is the colonel's reputation for undertaking suicide missions throughout the Imperium.

Most Imperial Guard Penal Legions are vast hordes of scum dredged from the bottom of the Imperium, turned loose from Imperial prisons, given the cheapest equipment, and used as cannon fodder ahead of more valuable and accomplished units. The condemned soldiers who populate these regiments fight knowing that death is their only escape, and fight savagely to seize their last chance at redemption. However, there are other regiments that have been similarly condemned but are too valuable to simply discard—at least, not without making sure that their lives are sold at a heavy cost in the blood of the Imperium's foes. Some regiments also carry this practice out on a squad level, sending those who have disgraced themselves in the eyes of the Emperor on critical but nonetheless suicidal missions. Sometimes, multiple regiments sharing a field of operations even expunge all of their "undesirable" elements and form these condemned soldiers into a savage (if short-lived) battle group capable of wreaking terrible damage upon their foes.

Perhaps the most famous of such groups of desperate "Last Chancers" are Colonel Schaeffer's 13th Penal Legion, who bear that very name and have proven extremely effective under the direction of their commander. The 13th Penal Legion, unusual among the many Penal Legions that serve in the Imperial Guard, was in fact a testing ground. Schaeffer would hand-pick his regiment's troops from Imperial prisons' worst convicts because of some natural talent they displayed or because they possessed an uncanny instinct for survival so that they could serve as part of an elite ad hoc military team intended to achieve some difficult, usually borderline insane military mission objective of the Imperium. These dregs comprise the most vicious, ill-disciplined and unstable group of psychopaths, conspirators, thieves and traitors in the Imperial Guard who would otherwise be destined for the firing squad or the business end of a Commissar's Bolt Pistol. Many of those offered the chance to fight with the "Last Chancers" choose death rather than follow Colonel Schaeffer, for such is the colonel's reputation for undertaking suicide missions throughout the Imperium.

Initially, Colonel Schaeffer recruited thousands of criminals at one time, gathering enough troops to form an entire regiment. These convicts would then be thrown into quite literally the worst battlefields he could find, using attrition as a mechanism to determine the most capable members of the unit until only the most hard core survivors remained. This was a process that usually reduced the original numbers of the unit down to under a dozen convicts. These remaining hardened killers would then be informed of the Colonel's true objective, although rarely of its status as the driving force behind the regiment's existence. Those who survived this last suicidal mission would then be granted their pardon with the caveat that they could never commit another crime, and allowed either to return to civilian life or rejoin the Imperial Guard as regular Guardsmen. However, Schaeffer was known to track these few "lucky" Last Chancers, and keep close watch on them. Unhinged by their many near-death experiences, almost all of them would re-lapse into lives of criminal behaviour, and Schaeffer would be there to reabsorb them into the regiment, this time permanently. One of the most notorious of such members was Lieutenant Kage, who survived his first mission, got reabsorbed into the 13th Penal Legion after "losing it" and killing three senior officers, and then succeeded in surviving a second campaign before heroically sacrificing himself to allow a third one to succeed.

Following this modus operandi of Colonel Shaeffer, there have ultimately been many different 13th Penal Legions in the Imperial Guard's history, one for each chosen objective, and although it is not known if all of these units were commanded by Schaeffer, his extreme age and status within the Inquisition suggest that the two have been linked for some time. Though they are often not liked or even respected by other regiments, these desperate fighters are known for their ability to get the job done—and this includes "acquiring" the equipment they need.

Condemned battle groups of colourful and desperate characters have been used to great effect on the Spinward Front of the Calixis Sector. Certain commanders find them valuable for fighting the Severan Dominate, who are more vulnerable to their terror tactics than the Orks or Dark Eldar. Others prefer to send them against the xenos, thinking it best to kill such beasts with monsters of their own. One instance of a group of disgraced soldiers winning back their honour (if not their lives) involved a squad of Brontian Longknives condemned for suffering the disgrace of scars on their backs. As penance, the squad was sent across the ashwastes of Hervara to assassinate a Severan Dominate Ducal Legate -- a suicide mission. Within hours, they fast-marched across the volcanic wastes, destroyed the Legate's camp by diverting a lava flow, slaughtered their foes in an ambush, and returned to their regiment with the Legate’s head. All members of the squad perished in battle or from exposure after returning. A monument made of hundreds of knives to the "Heartrippers" still stands in the Hervaran ash wastes south of Cobhan.

An oddity among the numerous Penal Legions serving the Imperial Guard, the 13th Penal Legion, under the command of the iconoclastic Colonel Schaeffer, is as much an experiment in military science as it is a military regiment. The 13th Penal Legion is composed of a motley assortment of criminals, recidivists, malcontents, madmen, and assorted detritus from the most hardened military prisons kept by the Imperial Guard. Every one is hand–picked by Colonel Schaeffer himself and each has some outstanding skill or natural ability that sets them apart from their comrades. following some internal plan of his own, Schaeffer picks these recruits seemingly at random and offers them a "last chance" to atone for their crimes and put their God–Emperor given talents to good use. What he offers is a full Imperial pardon and freedom from prison, what he asks is nothing short of their lives, something that most gladly give.

Upon accepting Schaeffer's offer, each new recruit is whisked off to a private, secret penal colony administered by Schaeffer for the sole purpose of raising his 13th Penal Legion. Once there, the recruits spend months training for every kind of mission in every kind of environment imaginable. If the recruit survives with body and wits intact, he is assigned to one of the many small clandestine units organised under the 13th Penal Legion's aegis. These small units are deployed across the galaxy to fight a shadowy war rarely seen by the average Imperial Guardsman. Colonel Schaeffer has worked hard to hone the surviving Last Chancers into a deadly spear with which he can stab at the hearts of the enemies of humanity unopposed, when and where they least expect it.

Another thing that sets the "Last Chancers" and other, similar apart from their common Penal Legion counterparts is the special training regimen they are put through to fulfil their clandestine missions. Some of these groups are subjected to a gruelling, months-long training regimens to enhance the natural skills and talents for which they were chosen. If their missions call for it, these recruits might also receive training in close combat techniques, sabotage, infiltration, different insertion and extraction methods such as grav chutes and underwater infiltration, and survival in all manner of hostile environments. Those who survive the training (and safety is hardly a priority, given the condemned status of these dishonoured soldiers) gain the skills needed to be some of the most vicious and lethal warriors in the Imperial Guard.

The missions that such condemned soldiers take part in are nothing less than sheer suicidal madness. They are tasked with missions so clandestine, so dangerous, and so cold blooded that they would give any commander pause. Assassinations, mass killings, gathering intelligence, infiltration of heavily guarded and fortified enemy facilities, and the sabotage, theft, and destruction of untold thrones worth of property and war materiel are all in a day's work for the 13th Penal Legion and other regiments of their uncouth ilk.

Unlike the majority of Penal Legions, men and women belonging to groups like Colonel Schaeffer's 13th Penal Legion and other, similar organisations are remarkably well equipped for groups of incorrigible criminals. Given that such groups are frequently used by their commanders to carry out deadly covert strikes, assassinations, and other underhanded tactics that more conventional regiments would never even attempt, the weapons they carry often pack an incredible punch in a small package, and are well suited to their stealthy and clandestine assignments. Even their standard weapons, such as the run-of-the-mill lasguns they are issued, are heavily modified. For protection on certain kinds of missions that demand that they pay their debt to the Emperor before perishing in his name, they are even assigned light armour that still allows them the freedom of movement to execute their savage stealth raids upon enemy positions.

The following is the standard issue kit for troopers of the 13th Penal Legion:

The Last Chancers 13th Penal Legion is based upon the World War II-era film The Dirty Dozen as well as the use of penal legions by both the Soviet Union and Nazi Germany during that conflict. 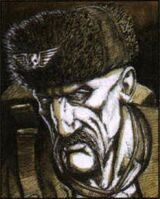 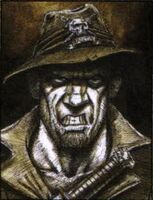 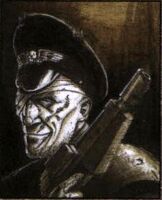 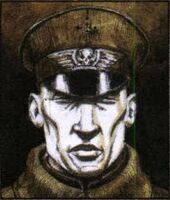 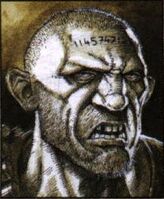 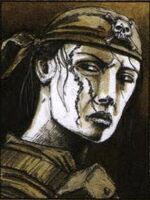 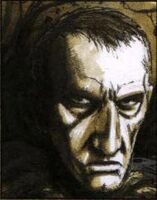 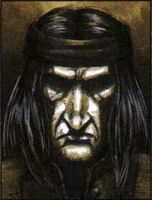 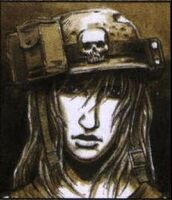 "Warrior Woman"
Add a photo to this gallery
Retrieved from "https://warhammer40k.fandom.com/wiki/13th_Penal_Legion_(Last_Chancers)?oldid=290278"
Community content is available under CC-BY-SA unless otherwise noted.