The 13th/5th Imperial Army, also known as "Hylgar's Hellraisers," was an Imperial Army formation according to obscure but extensive records.  Although recorded in Imperial records as an Imperial Guard formation of the 41st Millennium active between 975.M41 and 988.M41, many of its elements are in fact highly archaic and more reminiscent of an Imperial Army regiment of the Great Crusade and Horus Heresy periods. What is known is that its regimental name designates it as the 13th Imperial Army of the 5th Quadrant, and that it was commanded by Julius Hylgar, a senior member of the Administratum as well as the holder of several other Imperial titles, such as "Cardinal of Kolarne" and "Grand Marnier Militaris." This latter title was one used by the Administratus Militarium, the Administratum's martial branch (a possible antecedent of the current Departmento Munitorum).

The 13th/5th formation is listed in no contemporary order of battle of the Imperial Guard and many of its elements are in fact so ancient as to lend credence to the notion that a later scribe of the Administratum may have inadvertently mis-transcribed a notation in Imperial records, recording an ancient Imperial Army regiment as a member of the current Imperial Guard.

The earliest origins of the vast organisation known as the Imperial Guard can be traced back to the Imperial Army of the Great Crusade at the dawn of the Age of the Imperium. Following the cataclysmic events of the Horus Heresy, the Imperial Army was dissolved and reorganised as the Imperial Guard and the Imperial Navy. As with so much of the earliest histories of the Imperium, this transition can only be glimpsed through a limited number of sources which have survived the tide of millennia in crumbling reliquaries and data-stacks. Unfortunately, these existing records are often complicated by commentaries and the postulations of later periods after much knowledge in regards to the Horus Heresy was suppressed or lost. Within the dusty pict-archives of Enfield IV, obscure but extensive records can be found on the 13th/5th Imperial Army formation of "Hylgar's Hellraiders." Though listed as a contemporary Imperial Guard regiment of the current millennium, these records are patently a later copy from an earlier reference.

This formation is listed in no contemporary order of battle of the Imperial Guard, which in itself is not unusual in the late 41st Millennium but for the fact that the formation's original leader, Julius Hylgar, is listed as bearing multiple titles, which include: Cardinal of Kolarne, Imperial Commander and holder of the Grand Marnier Militaris (curiously, no other references has ever been found to this title). The title of Imperial Commander is a reference to the system in which the 13th/5th are based. The title of Grand Marnier Militaris was one used by the Administratus Militarium, the Administratum's ancient martial branch (a possible antecedent of the current Departmento Munitorum). No man has been permitted to hold both a rank in the Adeptus Terra, the Ecclesiarchy and a commission in the Imperial armed forces since the terrible events of Goge Vandire's infamous Reign of Blood and the Age of Apostasy during the 36th Millennium.

"Only in your deepest self is the truth of what you can be. And, without a doubt, that truth is terrible to hear."

The units of the 13th/5th exhibit a frankly puzzling assortment of weapons and troops, including Mutants and grav-vehicles. All such units like the mutants were either outlawed after the Horus Heresy or are simply no longer available in the present due to the Imperium's gradual loss of technological knowledge, as outlined in the earliest volumes of the Tactica Imperium. Therefore, it is likely that the 13th/5th date back to before this era, probably to the early 31st Millennium, the last time units with this unusual formation and composition were known to be actively employed by the Imperium. No conclusive information could be garnered from further investigation however. As with so much of the origins of the Imperial Guard, knowledge can only be pieced together through speculation and supposition based around known events, as the existence of Hylgar's Hellraisers aptly demonstrates. The 13th/5th was comprised of 12 Army brigades, and Hylgar was able to call upon the services of a contingent of the Imperial Fleet, possessing three Warp-capable craft for his private use. The Hellraisers' 12 brigades were garrisoned in the Kolarne System and their headquarters was located on the Garden World of Durla V. The garrison brigades of the regiment were each led by a senior officer of the Imperial Army with the rank of Brigadier-General, and each brigade was divided into 10 companies, led by an officer with the rank of Captain. The Hellraisers contained a number of Abhuman squads that were composed of Ogryns and Squats. They also had access to a variety of standard and non-standard heavy armoured vehicles, light vehicles and support weapons which included: Hellfire Land Raiders, Black Shadow Attack Bikes, Land Speeders, Mole Mortars, Rapiers and Tarantula Sentry Guns.

The following is an example of the duties and composition of the 10th Company of the 13th/5th Imperial Army. The duties of the 10th Company were to maintain order in the Kolarne System and to protect the sector from incursions by the Orks and Eldar Corsairs. This was no easy task, and the Hellraisers were hard-pressed in the face of such a multiplicity of enemies.

Obviously, the background for this regiment is derived from the early 1st Edition of Warhammer 40,000 and contradicts the organization and wargear given to the Imperial Guard in most of the later editions of the Warhammer 40,000 universe. However, the second Codex: Imperial Guard of the 3rd Edition of Warhammer 40,000 also mentions this old regiment, concluding that its archaic nature indicates that it actually existed before the start of the Horus Heresy as part of the original Imperial Army and that it was misattributed as a regiment of the present-day Imperial Guard. One problem with this conclusion, however, is that the regiment's records describe Julius Hylgar as being a Cardinal and the Adeptus Ministorum was only established as an Imperial Adepta in the 32nd Millennium, well over a thousand standard years after the end of the Horus Heresy. Without any other sources to draw upon, Hylgar's Hellraisers are best understood as an ancient regiment of the Imperial Army whose records became fragmented and misplaced and who were mistakenly listed as serving during the 41st Millennium. This is how the regiment has been presented here. 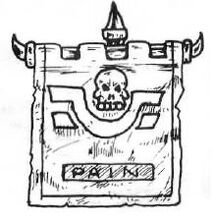 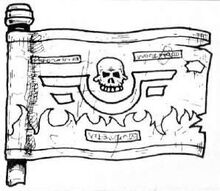 "Destroyers" Ogyn Squad Banner
Add a photo to this gallery
Retrieved from "https://warhammer40k.fandom.com/wiki/13th/5th_Imperial_Army?oldid=292795"
Community content is available under CC-BY-SA unless otherwise noted.