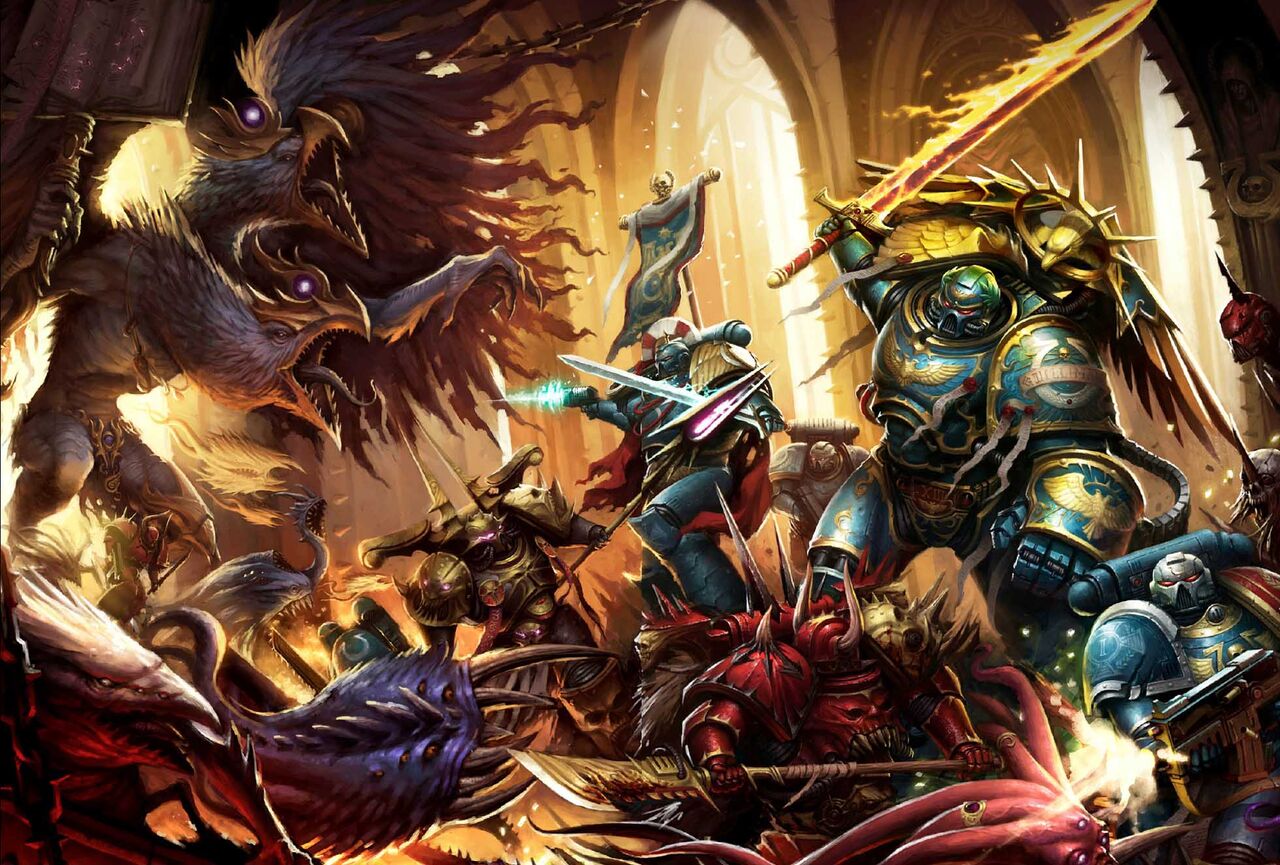 I was just wondering if using the Narhecium could be used as a weapon? I personaly could see all kinds of weapon uses and even had a long discussion about this with my group.. As nothing could be found we left it be :(

Apothecaries tend to wounds that can be tended too, but ruining their battle brothers power armor in the heat of battle is not prudent. If they are wounded so much that you have to remove their armor, they would not be on the battlefield. This goes for all kinds of field-medicin, which is the difference between a field-surgeon and a medic.

problem: if you have to treat osmebody on the battlefield, you do it, especially when that is a huge investment as far as training and so on go, not to mention the years and years of experience of the average battle brother and their rather low number to begin with.

you might not always have situations with med evac and what not, they will be treated.

But, if such would be the case that they need to rid the armor to treat the damage, a short touch from a saw would be the least of their problems and the easiest to treat.

cuts to the bone are not that easy to treat, nevertheless they seem to be preferrable to no treatment at all

I agree with Legionaire.If an Astartes is too injured to fight, or needs his armour removed chances are he is dying or dead... But remember battle injuries do not slow a Space Marine... One can lose a limb or two and still attempt to fight on. Such is their duty, their sacrifice, theor purpose...

(edited by Sorcerer Du'un)
0
Legionaire22 wrote:
Apothecaries tend to wounds that can be tended too, but ruining their battle brothers power armor in the heat of battle is not prudent. If they are wounded so much that you have to remove their armor, they would not be on the battlefield. This goes for all kinds of field-medicin, which is the difference between a field-surgeon and a medic.

Its not mentioned much these days, but the astartes carry repair kits for minor damages (space wolves novel #1) additionnaly, when some one is on the edge of operational incapability, or the possibility of restoring some one to operations, you do it. Apoths carry some stuff that can turn a mildly non full operational Marine Back to operational.... And for removing a Space Marine From the battle field due to a portion of their armor being removed is different from a Human with out PPE, The Astartes in question is pushed by psycho conditioning beyond our understanding... lossing a limb to them, while it sucks, is not the end of their combat operations (Garro when he looses a leg, Vispus Nero hacked off his own damn hand in the first HH book)  Astartes can go beyond things that would kill a mortal man a few times over, take a normal Human's hand off, he is going to need med evac at the risk of his life... Nero was like..... "the hand was slowing me down" (in translation to modern words... I aint got time to bleed)

over a year between posts :)

in regards to the holy purpose of the tools, it's also the holy purpose of astartes to kill enemies of humankind and if an apothecary (apothecaries are marines first and medics second, like techmarines are marines first and techs second) has no weapons immediately to hand i doubt they'd hesitate for even a second before using the drill/saw of his gauntlet.

in regards to the use of these as weapons: i always thought the drill was specifically for the extraction of the progenoids - the drill cutting through the armour to provide access. and while i believe the drill would be relatively slow in cutting through power or terminator armour, and any lateral tension reduces it's ability, it would still be a lethal weapon against anything from bare flesh up to flak armour. the saw i'm of the opinion is for extreme injuries - a marine takes a wound in the lower leg/arm that requires amputation, the saw is then used for that as well as removing any armour in the way so the wound can be cauterised.

as for the needles and such, while they could theoretically be used effectively as weapons i doubt astartes, loyal astartes at least, would use them as such. they would probably be quicker and more effective just using their bare hands.

(edited by Callummacdonald79)
0
your utterly on the money about the bare hands things.
(edited by WindOfTheUnwrittenLaw)
0

About the drill suddenly braking free and fucking shit up: its conical. Ergo it wont brake loose after the tip is through ceramite and whatnot like a cylindrical drill would. A conical drill would only widen the hole as it goes deeper. About astartes being too douchey to use a nartecium in combat... Naah. Maybe sanguinius special emo-snowflakes with their sanguinary priests but no selfrespecting chapter would arm their battlebrothers for battle and then tell them not to do battle with what they have been armed with. About the narthecium being too flimsy... Well its an admech bayonet breacher mounted next to a chain knife or a bulkhead cutter... All intended for use on nonsquishy, very angry targets.

(edited by A Fandom user)
0

In the board game you can, as I recall It worked like a shitty chain sword when rolling your dice cause it had to be rolled separately from chain swords, and combat knives. If it's listed in the codex as a weapon it is one.

(edited by A Fandom user)