What's on your mind?

Good morning everyone. First, let me start off by saying how incredibly grateful I am for the interaction and discourse with my tournaments thus far. I put a significant amount of effort into setting these up, and providing the context and dialogue to enable each matchup to be enjoyable to all.

As of late, I have noticed a significant drop off in the discussion for each matchup, and while I know many of you enjoy seeing them, I believe as a whole, the length of these tournaments has taken a toll, and has become a touch mundane for many. I do not point fingers or take offense. I believe that a burnout has occurred, which is the last thing I want, for these tournaments are profoundly enjoyable for me, and I love to see the interaction.

With all this said, I believe the time has come to put a pause on my large tournaments. I know we are in the midst of one right now, but there is still 2 months left in it, and it is a significant time commitment for both myself and all of you.

I will continue to post as I previously did prior to the tournaments, with one-off matchups, short writings, character stories, and overall questions. Thank you all for the incredible support you all show in just voting and commenting.

The Emperor Protects, For the Pantheon, For the Omnissiah, WAAAAGGGGGHHH, For the Greater Good, Oh please don’t let Slaanesh take my spirit stone.

While human view the emperor of mankind as a god figure.

Emperor of MankindImperium of Man

So I have a problem to decide between two Gods, Khorne and Nurgle. I like them both, their motives and the whole thing in general. But it's hard to choose which one. I like Nurgle for being the only kind God and wanting the best for you (according to him), his followers feel no pain and spread pestilence and death. And most of all you don't have to die randomly at the hands of your brothers because they had to kill you to satisfy their lusts, and plague marines look awesome! And Khorne... i just love charging, riping, tearing and screaming BLOOD FOR THE BLOOD GOD etc. And Khorne daemons look better than Nurgel daemons in my opinion, maybe Great Unclean One looks great but for example Plague bearers in comparison with Bloodletter look weak and.... ridiculous. Both sides have pluses but it's hard for me to decide who to choose :/. 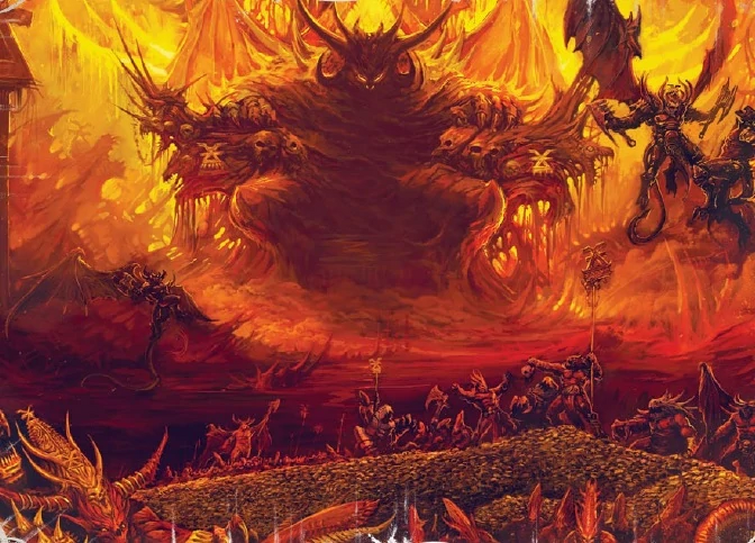 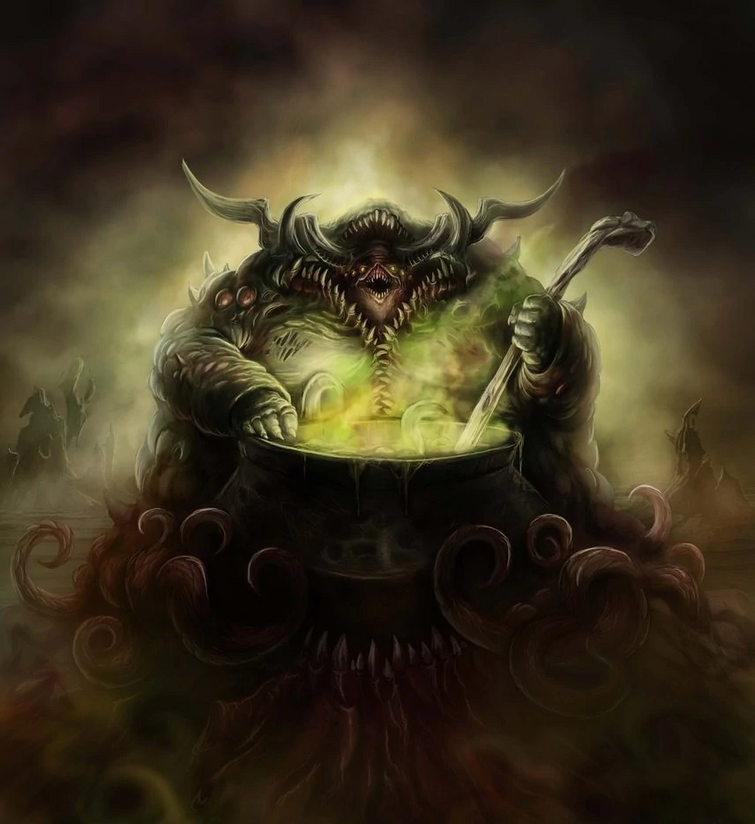 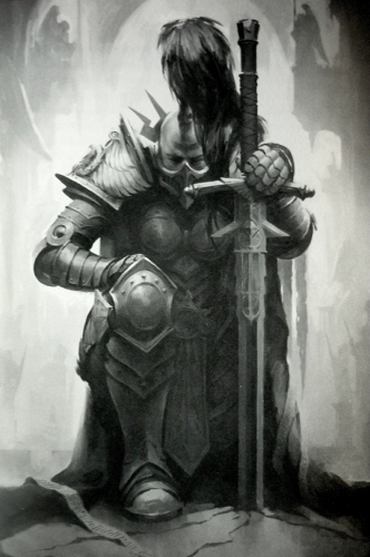 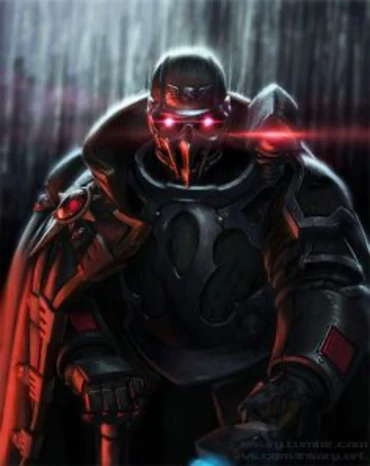 Mine is the latest and greatest trajaan valoris

What do you think would happen if instead of killing Necare the emperor captured him and had Mortarion and Necare fight to the death? How would this impact their relationship?

List the most diehard,fanatical and highly decorated guard regiments in the imperium. Top 3 of your personal favourite with war stories, regimental culture and Notable engagements. (I’ll exclude the Krieg Cus they take the prize most of the time I reckon 😂) Plus the more obscure the regiment the better. I need something too read 👌

The Pharos device created a beacon in the warp that attracted the Tyranids, right? But for the Tyranids to see that there would have to be a warp in other galaxies, so boom.

Chapter Two is now up. I promise it is more 40K than the last one.

Nexus is a metallic ore that can commonly be found in orc worlds, though they can be artificially made my combining common resources, like quartz, iron, uranium, and small amounts of ionizing radiation. When the three are combined, they form an atomic bond after 30 minutes, and after short-term (10 minutes) exposure to extreme heat, (5000 degrees Celsius) it becomes Nexus. The radiation from earlier is contained in the core of the Nexus, preventing dangerous chemicals from entering someone’s. This was discovered in a mysterious, barren, and empty world. After bringing it to a Tech Priest, they found out that this item can be used for multiple purposes, like combat and machinery.

There are negatively charged Nexus, which can be used in weapons and machines that require huge amounts of radiation (basically a plutonium core in real life, but with a different name). Moderately charged Nexus can serve as fuel for vehicles and basic plasma weaponry. Positively charged Nexus is very rare, and takes hundreds of years to form, since Nexus of the above types have radiation, and the radiation has to cool off. This can be used in the production of vehicles, engines, machines, power armors, etc., due to it having properties similar to quartz in real life, which makes both conduct or store electricity. There are multiple types of them, but here are the common ones:

There are thousands of different common types of Nexus, but these are the most common. (1 for the most common of the 41 Nexus types above, while 41 for the least common)

It’s also worth mentioning that each of the Nexus types above can do different things, like how Magnus Serafia is highly combustible and explosive, so it can be used for bombs and the like, while Blood Berkosis can be used to make weapons that get stronger if the user feels great rage and resentment. Psychosa, on the other hand, can give someone psychic abilities, or other abilities that may or may not be magic.

Sir, we need to take cover, we are getting killed out here!

So, what do you think? 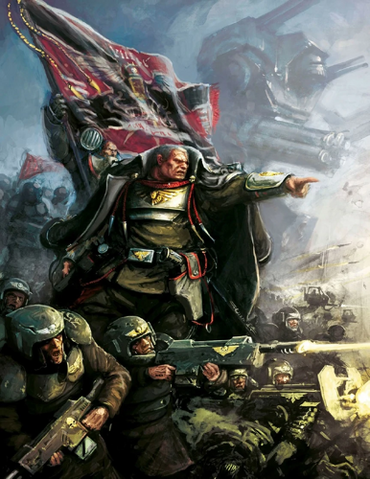 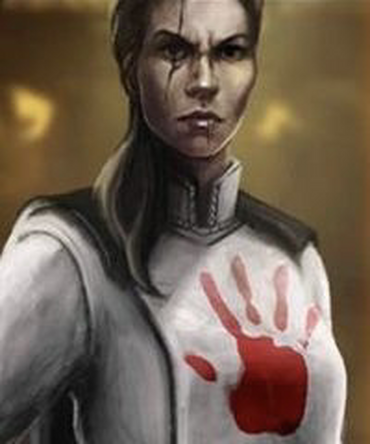 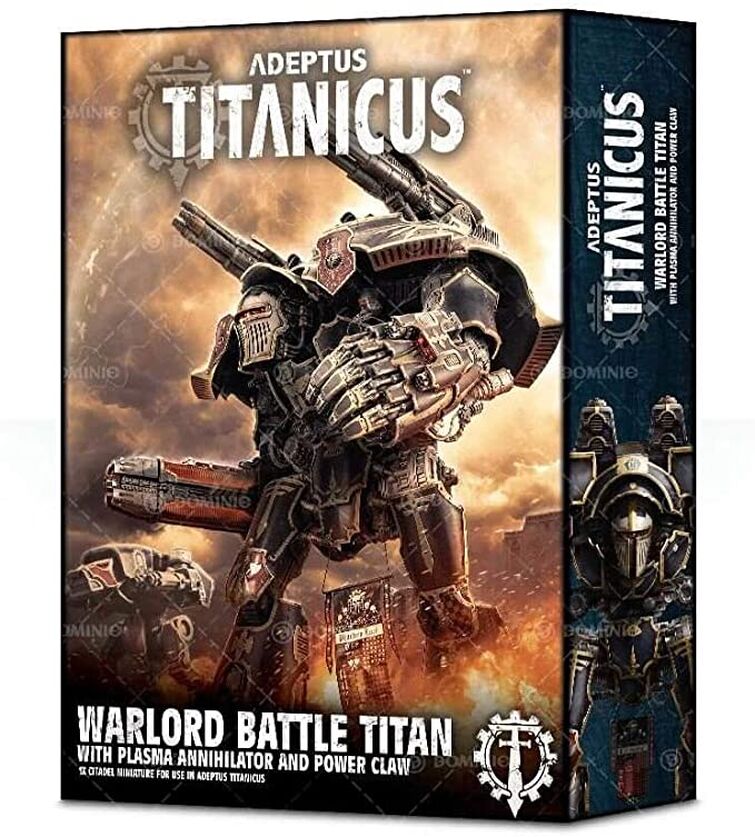 Let´s ask for sake argument ask, were there any ways that Imperium would not stagnate in technological, cultural or in spiritual manner? Asking from me there are some ways.

This one was most obvious way to do it. Because Emperor was one of main reason why Imperium became so powerful in such a short time. His scientific mind, immense power as psyker and above all the WILL to see the undertaking through. With his wounding by hands of Horus Imperium was forced to make do without his influence and leadership which ultimately yet slowly led to current events and events in between. If he had stayed alive maybe he would have over time found a way to close Webway gate on Terra permenantly without his psychic power to keep it closed and maybe would have kept Imperium in the path he wanted to or at least stopped its decay from happening.

2. Mechanicus became non-religious organisation during the Great Crusade or would have started out like that:

If there was no cult mechanicus or religious doctrine in Mars just desire scientific discovery and proven methods for research and scientific development, over time Imperium and Mechanicus in Mars and everywhere else would have remained advanced and would have kept advancing in technology and most likely have surpassed its current technology during M42. Lack of advancement is one of the reasons why Imperium´s enemies became able to stand up against Humanity despite the size of Imperium´s power and military capacity.

Constant war is/was a slow poison that was/is killing Imperium of man due to being forced to constantly focus it´s resources to it´s military and fortifications to protect itself from potential enemies inside and out. If there was less war Imperium would be able to focus it`s time and resources to actually improve society, the structure of the organisations within Imperium and function more efficiently in the hostile galaxy.

3.1. There is also possibility that peace would lead to less culturally morbid society and more optimistic people.

3.2: Imperium would also be able to re-arm and build up it´s military forces if there was more peaceful galaxy.

If Imperium was more focused in fixing things that holds it´s bureaucracy in poor condition such as unnecessary departments that are not needed or are doing things that other department is already doing and outdated recording and methods of archiving it would be more efficient by long margin.

4.1. As for the religion of Imperium it has far too much power for the Imperium´s good for they hold a leash in every human by the forcing it´s citizens to worship Emperor as a god even if some don´t want to. Ecclesiarchy can label anyone as enemy of Imperium even if there is no reason to suspect those individuals because they are "heretics or traitors and worse". If religious believe in the emperor was optional and people were allowed to believe or not believe with more freedom as long as they don´t worship and serve "Gods of Chaos" there would far less religious conflict and killing of people who are suspected of heresy.

5. Sons of the Emperor or more commonly known as Primarchs never would have disappeared:

6. Imperium would have learned more about how Realm of Ultramar is managed or would have at least tried to make it a standard model of a functioning empire:

Despite the fact that Imperium is extremely stagnant and brutal society it´s has a small part of space that is managed very well. This is Realm of Ultramar created by Roboute Guilliman. It has very efficient military, governance and people who haven´t been broken from the inside or outside by hostile galaxy. If rest of the Imperium had manage itself like Ultramar has in it´s 10,000 years of existence, Imperium´s ability to endure and rule the galaxy would be far more greater than it is now.

Are there any other ways Imperium would not have stagnated after Horus Heresy? Would do you think?

Yet ultimately these are my opinion of the matter.

PS: This is setup again due to poor grammar in first one. And due to adding some ability to read it better. 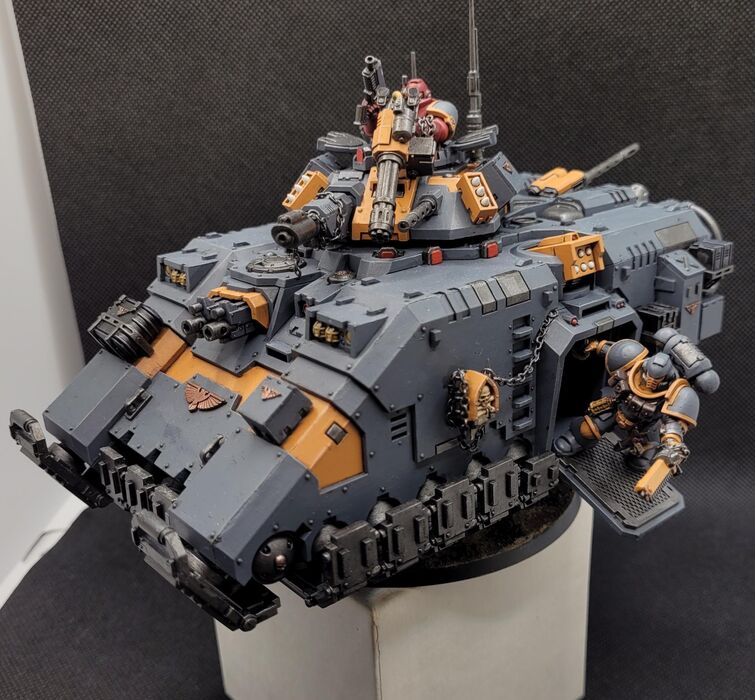 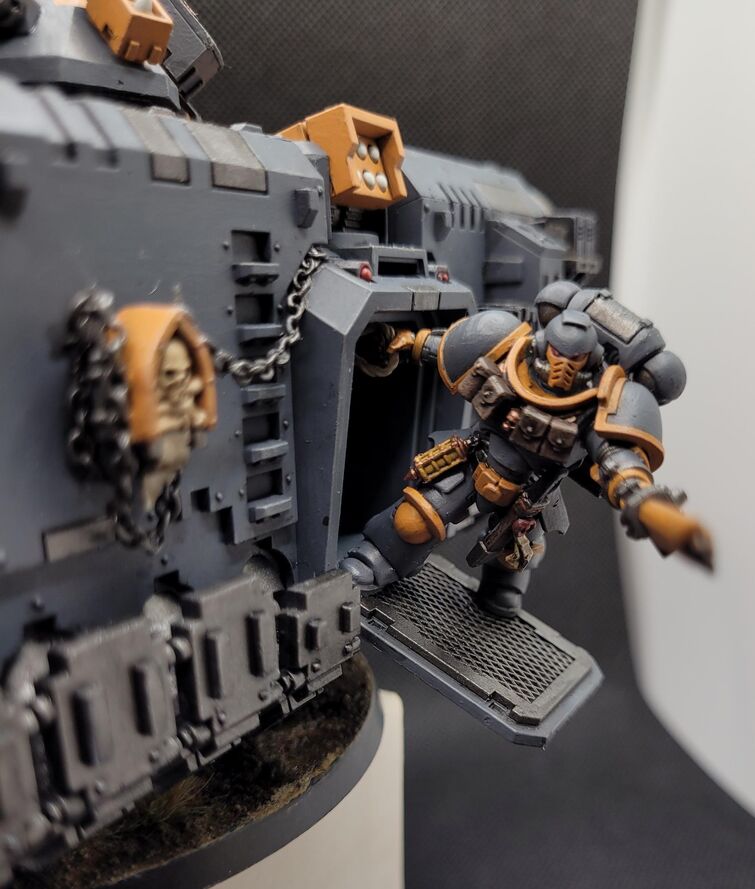 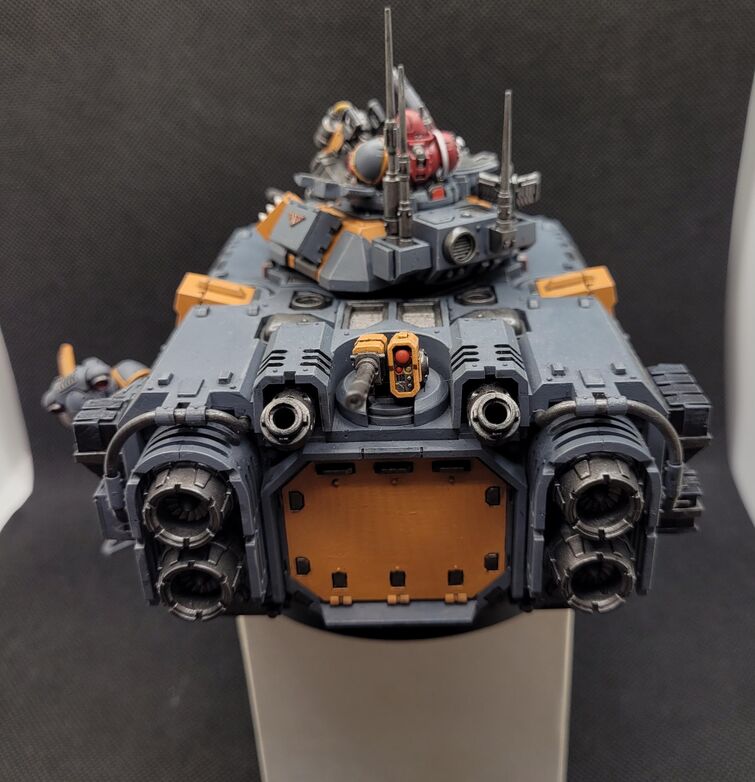 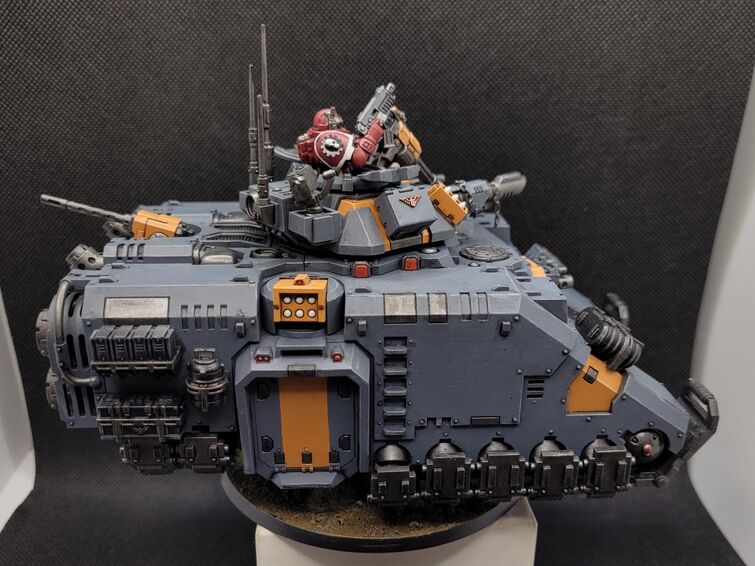 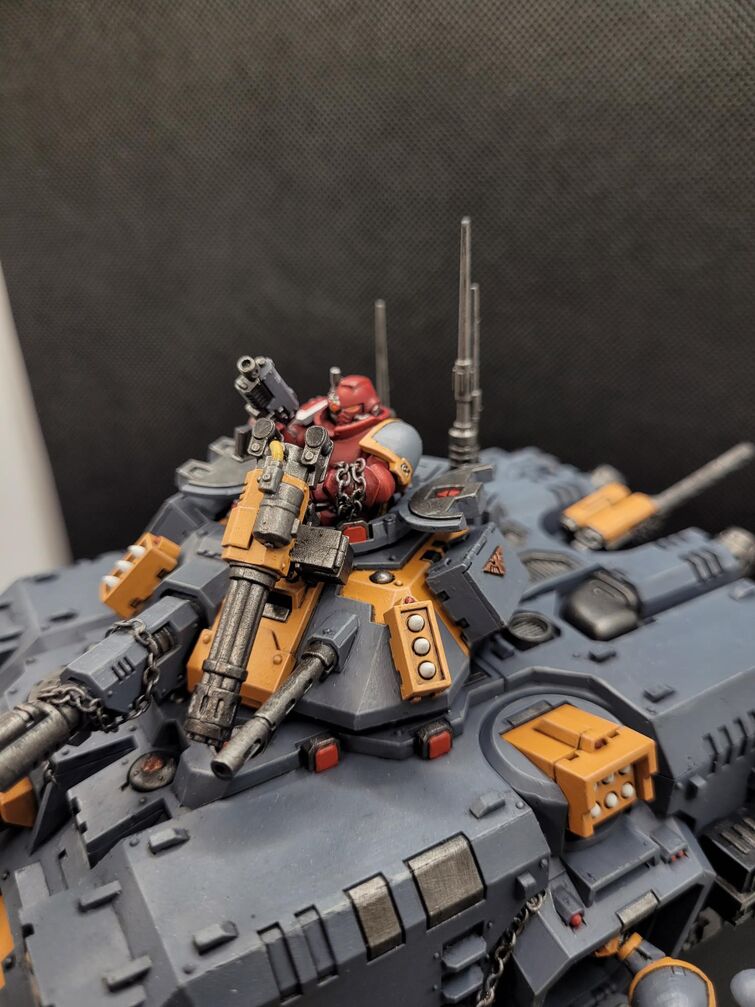 My apologies, however a work emergency has occurred, and I will be unable to post the match today. Will try to post tomorrow. Thanks.

I had it for 36€. It's waayy better than the MacFarlane toys